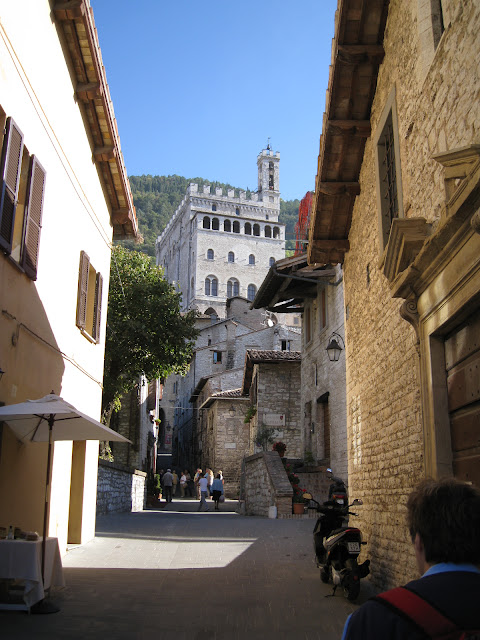 On October 4th, before reaching Laverna, we took a side trip to Gubbio. John and I were both eager to see this little town because of his book, WOLF IN WINTER, published in the mid-eighties by Paulist Press.  We watched for the scene he'd described in the book's opening:
"Gubbio grips the slope of Mount Ingino with all the tenacity and seriousness of a medieval fortress, stern as the cliffs rising behind it. It was the same in March of 1207. The city towers and the battlements on its outer walls had purpose then, protecting it from the raiders who poured out of Perugia, ruinous as the snow-swollen rivers raging down the sides of Ingino.
Atop the mountain, the monastery of San Ubaldo guarded the city and the Apennine passes. Even the cypresses ranged in columns on the hills had the appearance of sentinels. With the stiff movement of chilled watchdogs, their shadows stretched through the lavender dawn, patrolling patches of mud and dirty snow, leaping the low stone walls and grape stalks of the smallholdings outside the city."
(--John R. Sack, WOLF IN WINTER) 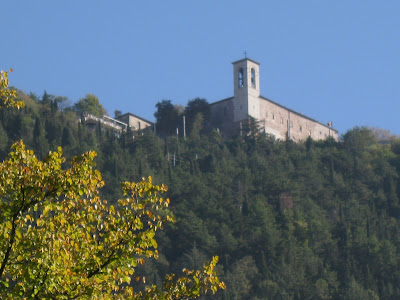 This story of St. Francis as a youth is the one that started it all for John, and so was greatly responsible for this pilgrimage in our lives. It is presently being reprinted by Tau Press and should be available in early November of this year. He’s since written two historical novels (The Franciscan Conspiracy, and Angel’s Passage) both of which are available for purchase. (Is this beginning to sound like an advertisement??? Hey, I love the guy AND his talent for writing. These are great books! And he is working himself up to yet another – resulting in a true trilogy of the longer, more sophisticated works. WOLF IN WINTER is more a young adult novel—but well worth the time of an old adult--such as I.)
On our own way to Gubbio the traditional story of the wolf was retold by Alex, our guide to the spirituality of each place. As the tale goes, a wolf was foraging in the town of Gubbio. The townspeople worried for their supplies, their animals, their children and their own lives. St. Francis, passing through, offered to talk with the wolf to see if some arrangement might be made. And sure enough -- recognizing Francis's compassion and simplicity and truthfulness, the wolf and the man reached an agreement. The wolf would respect the town and harm nothing, and the people would feed the wolf.
As he told the story, he kept referring to John, and pretty soon several pilgrims wanted to buy John's book which tells a rather more complex story, some of it from the point of view of Francis, and other sections from that of the wolf. Naturally, I'm not about to tell you John's plot or attempt to rebuild his fine characters here. Tau Press is about to send a whole box of newly printed books to Sunshine Hill. And they will be available both in trade paperback and for electronic books really soon. I hope you watch for them.
As we walked through the village on our way to the famous statue of Francis and the Wolf, we encountered another town market in the square. 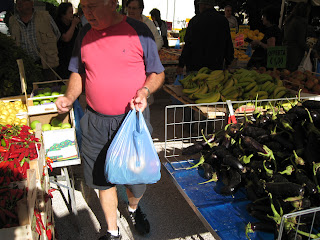 I believe that every pilgrim in our group had a picture taken with Francis and the Wolf. 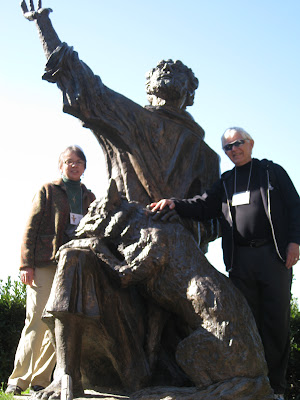 There's a famous saying: "God made humans because he loves stories." Stories of wolves survive in the mythologies of most European nations, and some very primitive ones feature the "Corn Wolf" which was literally the last sheaf of grain harvested, and was not to be eaten all winter, even if it meant that the people would go hungry. This wheat "belonged to the Wolf." In fact, this was the grain that would be planted in Spring, assuring the the survival of the people.
The Francis and the Wolf story seems, though, to add an important dimension to that more primitive one. Compassion. The open heart of Understanding takes the place of the closed heart of fear. Giving takes the place of hoarding as a way to survive. 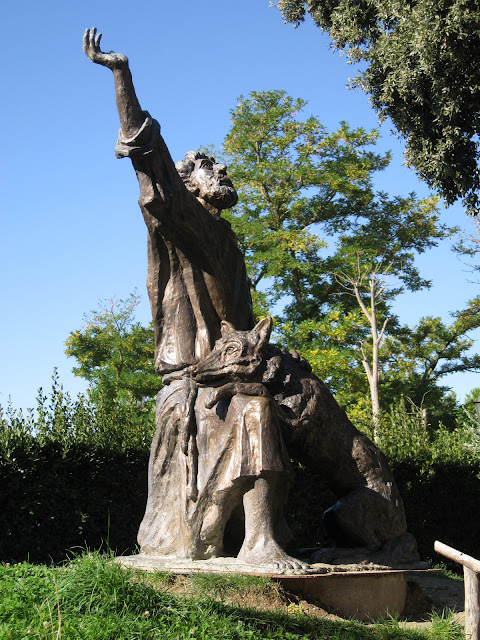