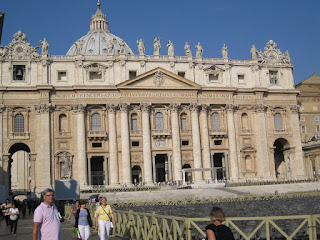 In Italy it is said that Rome is the administrative center of the church, and Assisi is the spiritual center--its soul. A hope that John and I had in making this pilgrimage was to reconcile those two in our own hearts and minds. Throughout the ages tension has existed between the church as institution and the church as mystical body. Law and Spirit. Doctrine and Mysticism/Contemplation. Christian mystics often were brought to trial -- (Martin Luther), silenced--(Teilhard de Chardin, Matthew Fox, Leonard Boff, and recently the theologian Sister Elizabeth Johnson), executed--(Joan of Arc, Marguerite Porete), or kept under close scrutiny--(Teresa of Avila, Thomas Aquinas, Francis of Assisi). Hundreds, maybe thousands of others could be added to the list--not just mystics, but scientists, poets, healers as well. Knowing this, what would the Vatican have to tell me on the morning of September 30, 2011?
The tour I would have liked went down into the excavations beneath St. Peter's Basilica to the ancient city where St. Peter most probably was buried in the very ground upon which he'd been executed. Father Theo had recommended this Scavi tour as the most spiritual. Deep calls unto deep… But we would have needed to sign up for it at least two months before. So we went up into the dome instead. Several other friends had recommended this "even if you don't get a chance to do anything else in Rome." We stood in line outside in the square to purchase tickets to climb the stairs, while tour hucksters tried to sell us 40 Euro tickets for a tour of the Vatican Museum and Sistine Chapel instead. It was loud and reminded me of the money changers in the temple during the time of Jesus. 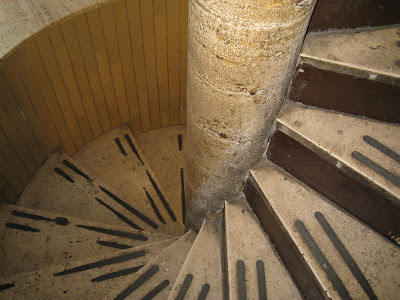 Our seventy-plus years recommended the elevator to the roof of St. Peter's before the 350 stair climb to the top of the cupola. About half way up we emerged on a balcony inside the church from which we could see the long center aisle, the cruciform design with its side altars, the altar above St. Peter's tomb, the golden high altar, and people an inch high. Behind us were mosaics of gold and precious stone which from the distance to the other side of the cupola appeared as paintings, clear and distinct. We circled the cupola and returned to the stairs. The walls began to curve inwards until we were climbing at almost a 45 degree angle on narrow triangular steps. When the passage became almost too small for a large person, we emerged through a doorway outside above Rome. (Rather like the Space Needle in Seattle). From there everything can be seen: all of Vatican City, the Roman Walls, the Coliseum, the Parthanon, the new parts of the city, and church domes and steeples everywhere. I took a lot of pictures. It was a wonderful artistic, historical, architectural, cultural experience. 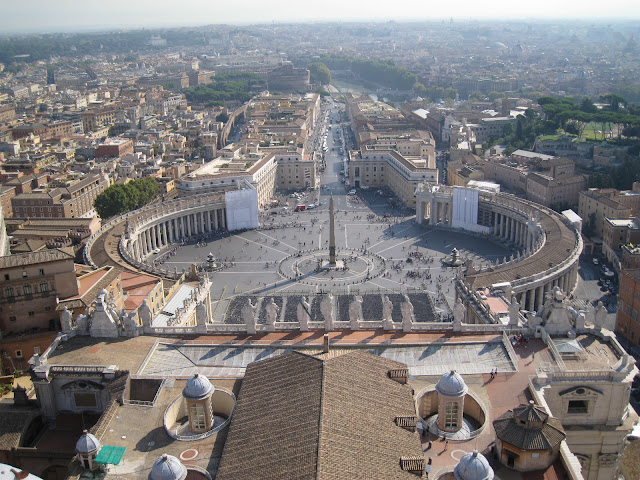 Back on the ground we made our way into St. Peter's to walk the space we'd just seen from above.  Looking up I could see people looking down from where we'd recently stood. I took pictures of the amazing works of art. I became a tourist. A good picture of Michelangelo's "Pieta" is impossible to get with a camera like mine. At home I have a small reproduction of this Pieta given to me by my mother. It's very well done. When I look at it on its shelf I am struck with prayer. But in front of the breathtaking original I could only try to take a picture. 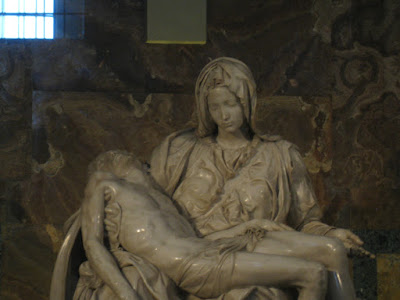 It's a museum, not a church, I concluded; and how sad that is to discover in what is intended to be the heart and home of Christianity. At the same time, I felt certain that not all of the people visiting there were feeling as I was feeling. And as we walked a bit farther we came upon a section which was roped off to all but those who wanted to confess their sins and receive the Sacrament of Penance. A woman stood waiting, and she stood in the center of a circular design in the marble floor. She had her hands folded and her eyes closed, and she seemed to stand there as though she weighed nothing, as though she might just lift off the floor. She was more beautiful than all the statues put together because she'd been filled with prayer.
Somewhere along the many chapels lining the sides of the basilica is one covered by heavy curtains. Guards control entrance to that place. A sign indicates that it is an adoration chapel and that the Blessed Sacrament is exposed within. Catholics believe that Jesus the Christ is really present in the consecrated bread, though what that belief might mean to an individual depends upon the grace of understanding only God can bestow. To me that day the chapel looked to be a refuge from tourism. "This chapel is set aside for prayer," proclaimed the sign. I dropped my tourist mask and John and I entered to kneel and pray.
The room is all gold. It is the beating heart of the Vatican. It's small. But it's there.
I didn't know yet that all along our pilgrim way we would find a beating golden heart somewhere within the shell of these medieval churches. It would be of Gold that had nothing to do with wealth achieved by money. It might be the cloak of St. Francis lying on the floor in the space where he died. Around it would be built a cocoon, a shell of marble, of precious jewels, of gold, of artistry in painting, weaving, sculpture -- all of it, the shell of gold, a protection of something more than precious. The living Heart. Waiting. And ourselves--pilgrims on the way to find this Heart in the unlikely -- a bit of bread, a cloak, a stone ledge where a holy man or woman slept, the holy bones of one who gave everything for love. All waiting in the golden cocoon -- for the breakthrough into what we cannot yet know but only yearn for.
There was nothing else to do in St. Peter's. We exited into the square and out beyond the square to where the street vendors sold their wares which included a rather inferior gelato. We bought two cones and sat on a little wall under a tree to eat it before setting off to spend the afternoon at the Vatican Museum and the Sistine Chapel.
Next installment on Monday
Email Post