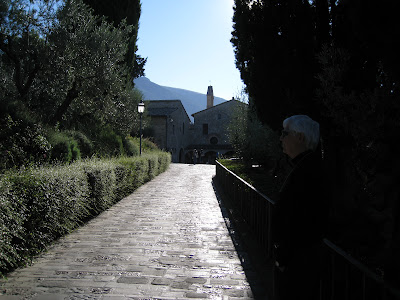 The morning of October 3rd we went by taxi to San Damiano, the ancient stone sanctuary where Francis once heard the image of Jesus on the cross speak directly to his heart. "Rebuild my church," was the life-mission the young twelfth/thirteenth century man was given.  He took the command literally, and began reconstructing the sanctuary stone by stone. This action grew into a metaphor for a renewal of Christian life which has spread across the world, continuing to have influence for both religion and culture in our contemporary world. Later a noblewoman from Assisi named Clare, influenced by his life and teaching, joined him and his growing community of friars. San Damiano became her monastic home, the place she lived and died among a growing number of holy women including two of her sisters and her mother. These were the first Poor Clares. 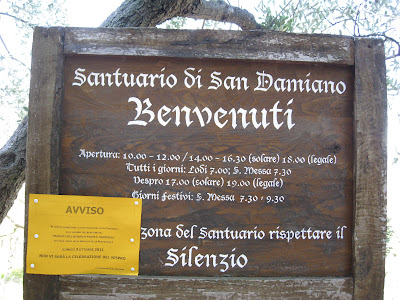 The taxis parked downhill from San Damiano and our pilgrim group began the trek up the cobble-stoned road. I snapped a photo of the welcome sign with a yellow notice of this day being that of the "Transitus" or the anniversary of transition for Francis from an earthly to a heavenly body, or his passage from earthly life. "We praise our sister, bodily death," he once prayed. Behind the sign was a bronze statue of Francis contemplating the valley, down into the area where the lepers once were confined and where he went often with his brothers to nurse and care for their wounds and other needs. 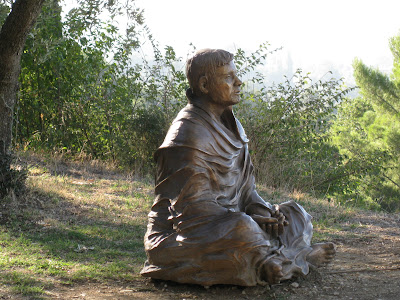 Just outside the monastery door is a statue of St. Clare raising a monstrance that held the blessed sacrament. The story is that during a war with the Saracens, as the soldiers marched up the mountain to raze the town of Assisi, she stepped out of the monastery and raised this holy object before them, miraculously stopping them, and the town was saved. I think of the wealth of our stories and the way that over the centuries they are refined and molded by the generations to speak truths otherwise impossible to articulate. What really happened? I wondered as I gazed at the statue. I've no doubt she confronted the soldiers with this holy object. But what really happened then? Were they stunned? Did they laugh? Did they see just a small woman standing in front of a tiny stone church and decide the whole campaign wasn't worth it? Or did they sense the present of the Sacred and, filled with fear, turn from their original intent? 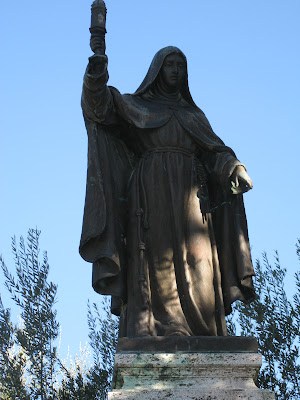 We entered the doors of the monastery. Inside there could be no photographs. 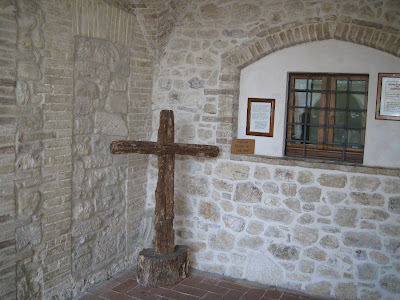 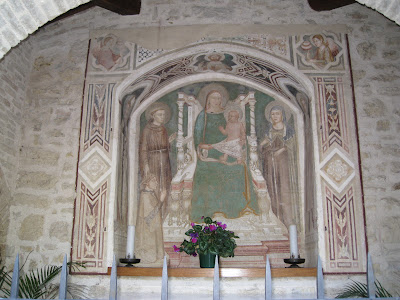 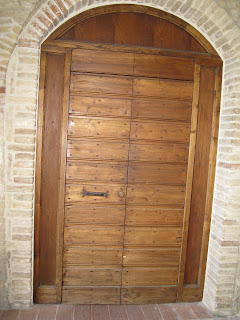 Here is a humble refectory where the Sisters ate their simple meals; here is the table where Clare sat. Here is the room in which she died; here is the very corner of the room; here is the window from which she could see the landscape winding down the hills; here is the little door through which the dying Francis was passed for her to say goodbye.
I stood where she died. Tears again. And my sister, Liz, came to mind. That morning I'd asked the pilgrims to pray for her. She's in her ninth year of battling stage four breast cancer. "I'm walking this pilgrimage for her," I'd said. And there in front of the place of Clare, Liz seemed to stand within me, the two of us one person, sharing this sacred space and the courage of another woman, Clare. Prayer has become not so much an asking for this or that, but a surrender, a being with, an opening of the heart, a trust in the goodness of the Holy God.
The stone stairs to the room where the sisters slept had been worn and polished to a shining curve that angled down.  Almost a thousand years of feet had climbed them. At each one I whispered a prayer for my grand-niece, Varrah Claire. May she shine. May her heart be generous. May her feet walk the way of love.
We celebrated Mass in the San Damiano chapel. Our pilgrim priest had the grace to truly pray publically. His was not a liturgical performance. His words (ritual words) seemed to originate in the core of his soul; he used no book; he spoke as though each of those words welled up from his depths, joined the air, and infused each of us and then continued on as air continues. How can the heart not burn to be part of something like that? 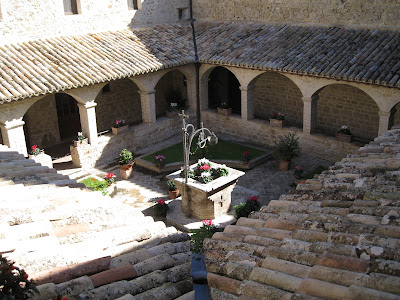