John and I just returned from our pilgrimage to Rome and Assisi, and my mind and heart are crowded with images and experiences. In the next few weeks I hope to sort out the high-points and write short reflections. Each day of the pilgrimage included so much that I stopped recording them in my journal and now must depend upon the photographs I took to trigger my thoughts.
Let me begin with what I wrote on September 30th--the day after we arrived in Rome and the first time I took my journal out of my backpack: 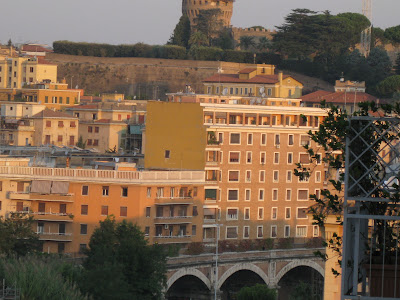 The orange sun set behind St. Pietro's House where we are staying for two nights. Both of us are just awakening from deep sleep, a nap following a full day in Rome. Outside, eight floors down from this tiny room, we hear the constant noise of traffic, the voice calling arrival of the trains, the train itself whistling and clicking over the tracks, and children calling to one another. Beneath our window-ledge-sized stone balcony are rows and rows of scooters and motorcycles that workers left parked while they take trains or buses back home from the city. 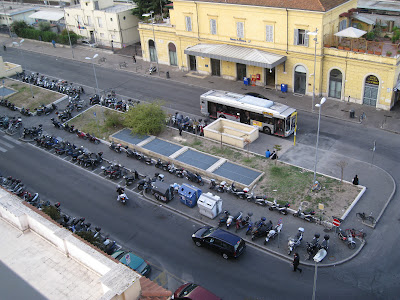 (below the balcony)
We have four locked doors down from here to street-level. The keys range from an ordinary small red one to an exotically long one that looks as though it came from a medieval stone prison. They were placed in John's hand last night. Weary after 24 hours of travel, we arrived here in front of a locked gate on a street that seemed unlikely to house people. It looked rather like a warehouse district, with an abundance of graffiti. But the cab driver pointed out the street name and number--the same as that on our itinerary. This is the place, he assured us as he drove off. We looked to see if St. Pietro's House was among the names of residents on the other side of the cast iron gate. Aha! The last of the list. I pressed the button. No answer. Pressed it again, and again. Nothing.
Dwellers at this address showed up, shook their heads when we asked about St. Pietro's House, opened the gate, went in, and locked it again behind them. One kind woman said she thought maybe there was a St. Pietro's House in the complex, and she let us in to explore. Now we were in a stone courtyard with paths leading off to several sections. A young Brit showed up. He was on his honeymoon and thought maybe we were looking for the Bed and Breakfast he and his wife were renting. It had a completely different name, but hey! anything is possible. At the same time two Italian men came home from work and let John know that we were in a condo complex, but they thought that a few people had bought units and turned them into Bed and Breakfast's -- probably St. Pietro's House was one of those. One of the men used his cell phone to call the number of the (as advertised) "hotel." At last--an answer. A man named Caesar finally came to let us in. He wanted payment--in cash--up front. OK, but there went half our Euros. We'd been thinking credit card for lodging and cash for incidentals. As often happens, my romantic imagination had insisted upon believing the misleading ads on the Web about this place with its view of St. Peter's Basilica, its balcony, its five minute walk to the Vatican. Well, there IS a view, but it is from down the street a block. There IS a balcony just wide enough for my size 9 feet. 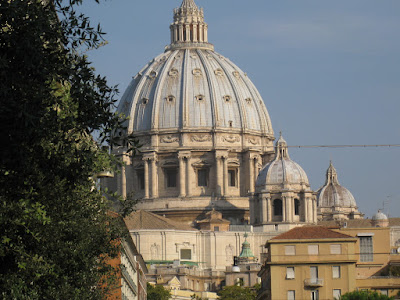 (seen from one block past St. Pietro's House)
We closed the door and I went into the bathroom. One look at myself made me want to stick my head into the sink, so I did. Cold water ran over my hair and I applied shampoo. The water stopped. Nothing I could do would make it run again. Neither did the shower water run. The toilet did. I tried the sink again. The sink faucet came off in my hand. I remembered the time back in the 1960's when the Second Vatican Council was in full swing and Bishop Glenn came to the convent to tell us about this momentous event, but all he could talk about was Roman plumbing--how old and useless it was. The young nuns--and I was one of them--shook our heads over what seemed his upside-down priorities. Now I was standing with a head-full of sticky shampoo, in a waterless bathroom five minutes from the Vatican, and my only thought was the lousy Roman plumbing. Mi dispiace tanto, Bishop Glenn.
I dried my hair, shampoo and all, and pulled it back in a clip. We then went out walking towards St. Peter's Square. The evening would have been perfect for taking pictures, but I'd left the camera in the room. I opened my imagination to the spirit of the people in the Square, the people over the centuries who had sought so many human and divine experiences there. It felt smaller to me than I expected--enormous though it truly is. Why is that? Maybe the great spectacles we witness on television tend to distort space because the medium allows only for a small scene, a frame of space, not the panorama--so the small is made to seem larger as it fills the screen. Once in context, though, the perspective changes.
Evening in the square was meditative. I looked for a stone for my dear Sammie, something worn smooth by millions of feet over the centuries, but found nothing like that. She would have loved a piece of St. Peter's Square, but it was not to be. 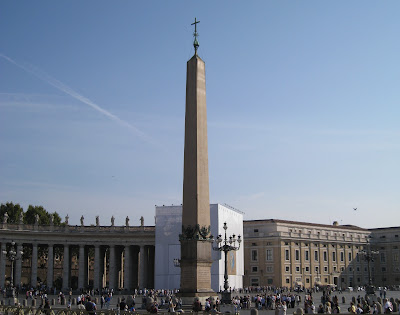 (the obelisk in St. Peter's Square)
Back at the room John figured out the mystery of the water faucets. We did have water after all, we'd only been too mentally exhausted to figure out how the equipment worked. All was well. I collapsed into bed, laid my sticky head on the pillow and fell asleep.