PILGRIMS ON THE ROAD TO ASSISI

Yesterday was my volunteer day at the parish, and besides taking Holy Communion and a San Damiano cross to my dear Millie who has a lifetime devotion to St. Francis, I also took my laptop with all 668 pictures of the pilgrimage. Telling her the story, I often found myself pondering over one or another picture -- let's see; where did I take this one? Already my memory of places and images are beginning to fade, but the imprint on my heart is not.
Early in the morning of October 2nd, we left Hotel la Villetta by taxi for the Leonardo da Vinci International Airport to meet the other pilgrims and ride by bus to Assisi. The plane from Georgia had landed and Bret, with the pilgrims from the East Coast, already stood or sat by the red Meeting Post. John began immediately to match names from our pilgrims' list to real people. He's quick at that and soon knew who was who and where each one lived. Bret wandered with a clip board and checked people off. Some were on different flights as we had been. A woman from England arrived. Another from San Francisco. A group of Philippino women from Tokyo, a Japanese man and his wife, a priest, and another couple from the States who had arrived early were staying at a hotel in Ostia, and the bus would pass by there to pick them up.
These sorts of details are about all we knew of one another at the beginning--this, and that the priest was in no hurry to get on the bus--a characteristic that eventually became endearing, even peaceful in its ability to slow the pace of the world we just had left to correspond to the one we were about to enter. Bret reminded us that a pilgrimage takes us into the unknown, into strangeness, away from the familiar. It is sometimes uncomfortable as the boundaries of our lives stretch to accommodate new experiences and living situations. The travel can be difficult and tiring. We would very likely become tired. But each of us could expect some kind of transformation, if not right during the pilgrimage, then at a time closely following.
The bus rolled out of the space in front of the hotel, all on board, and we set out through the countryside for Assisi. Bret pointed out an archeological site, and I tried to take pictures from the moving bus. 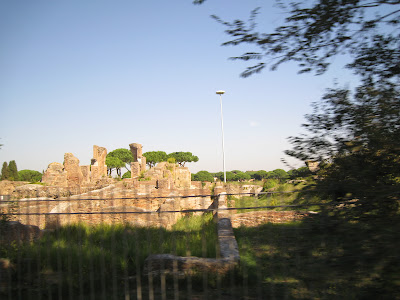 In two or three hours we had our first glimpse of Assisi, a medieval town on a hill in prehistoric Umbria where both St. Francis and St. Clare were born, lived, and died. 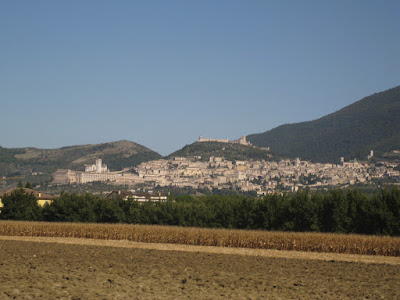 The bus passed beautiful St. Mary of the Angel's Basilica, the site of the "Porziuncula," constructed by Francis and his friars as their first place of life and worship. 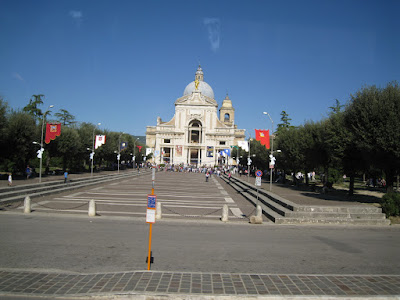 Right alongside this amazing church the bus let us off at Domus Pacis, the religious hotel where we would be staying for the next six days. We checked in, rested for a brief time in our rooms, and then all of us walked to St. Mary of the Angels for a visit to the Porziuncula. I had no particular expectations.
A small stone chapel sits right in the center of a Romanesque church that is like a cocoon around it. I was not prepared. I had not read enough. I didn't count on the spirit that would inhabit this place, the impact of prayer uttered over the centuries, the tangible devotion of my companion pilgrims, the power of seeing a woman in a shawl who was huddled on the step and leaning on the cast iron grille between the pilgrims and the altar with its icon of the Annunciation. Something both intimate and magnificent, ripping and like a kiss, piercing and fire-like broke my heart, and I began to weep.
In the past almost seventy-one years, whenever I've wept, I've known the object of my weeping. Joy or sorrow. A loved ones death. A kindness shown. Birth of a child. Impotence in the face of another's pain. Always 'something.' These tears at the porziuncula felt purely without object. They simply fell.
One of the pilgrims touched a stone. "Francis touched this very stone," she whispered. I touched it also. Yesterday I was attempting to describe this touch-devotion, which seemed to continue in various places throughout the pilgrimage. There seems an almost irresistible magnetism drawing human beings to touch what is loved or considered sacred. I think of the times I've touched the petals of a rose, let sand sift through my fingers, kissed the soft head of a newborn, held the hand of a beloved, run my fingers over the beautiful face of a child, my mother, my husband, my sister. I've kissed my fingers and laid them on the heart of the icon of Christ. Now I've touched these stones. I remember this moment the first time I touched the tomb of a saint. It was in Montreal. It was the tomb of Brother Andre (canonized in October, 2010). He'd been a special friend of Sister Ann, a member of the religious congregation to which I'd once belonged, so I made a special point of visiting his tomb. Tiers and tiers of candles, surrounded his marble sarcophagus. I stood before it, praying for Sister Ann -- and then it came to me to lay hands on that place above his body. Something like electricity came out from there, up into my arms and into my heart.
Two things: there is a prayer of touch. Every mother, everyone who's ever loved, every nurse and care giver knows this. The woman with the issue of blood in the Gospel knew this. Jesus knew. "Who touched me? I felt power go out from me," he said.
The second thing: The ego cannot interpret such experiences. It's best just to hold them lightly, let them happen, let them go.
In Assisi all I know is that I was unable to stop weeping.
Email Post
Labels: Assisi pilgrims spiritual experience