THE VATICAN MUSEUM AND SISTINE CHAPEL 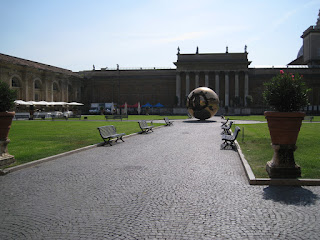 I've been sitting here at the computer at least ten minutes without writing one word. We had an afternoon at the Vatican Museum. This is like saying that we had four hours to gaze directly upon the history of the world's art. The question arose: does one stand before one piece and gaze until it fills you up? Or does one hurry through each age of human beings hoping to catch a glimpse in some superficial fashion of something at least of what they saw and were able to reproduce?
Before we left home a friend recommended that we resist the temptation to linger over the beauty along the way (I think it's something like four square miles) and push ourselves through the tour groups  as directly as possible towards the Sistine Chapel. There we could stand, craning our necks, for however many hours it took to see into the heart of those images. There were ceilings spun of gold. How does one resist the gaze? There were marble statues from Pre-Christian times, Roman, Greek. There were books and scrolls, tapestries that fingers yearned to touch. Chalices and jewelry. Icons, crosses, boxes carved of exotic wood. All with meaning. All done with the greatest human skill. All given, somehow, from the artist's heart to rest here in the house of God on earth. I wanted to see the sword of Constantine: I missed it if in fact it was there. So much I haven't told you. So much I've forgotten or distorted already. Now I remember that in the morning I kissed what I think may have been the cross of Jesus--the real one. I'm not sure. 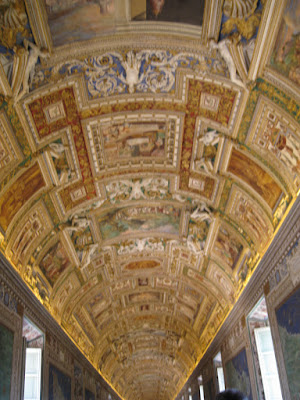 It started here, I think, that I started to be whisked into a different world, although I wasn't yet aware. So we hurried as we'd been counseled to do. OH! Let me stop in the Raphaelite rooms! Already we've taken two hours and haven't reached the Sistine Chapel yet. Let me sit on the floor here. Let me hear the voices of these people covering the walls. Let me look into their eyes. Let me set up a tent here.
The group moves and I am swept on. Arrows point the way to the small chapel into which Michelangelo inscribed his soul. The colors of the restored ceiling and walls dazzle the eye. I'm circling and circling like Maria on top of her Austrian hill. We aren't allowed to sing, however. "SILENCE -- SSSHHHHHHHHHHHH" the guard hisses over his loudspeaker. A man close to me murmurs, "If he'd just shut up we might have a little peace in here!" My eyes go to the center of the ceiling for a view of the creation of Adam from the finger of God. It's quite small!!! Somehow I expected it to fill the entire field of vision. I want to smell the paint, the oil, the turpentine--maybe that would make all this seem more real, because it doesn't seem real. Something of me wants to be in the room alone, just to breathe. Maybe I could be there for a week, to look at each scene for a long, long time. The Last Judgment makes me want to lie prostrate and weep. I am overwhelmed. I no longer know where in the world to look.
The way out is different from the way in. 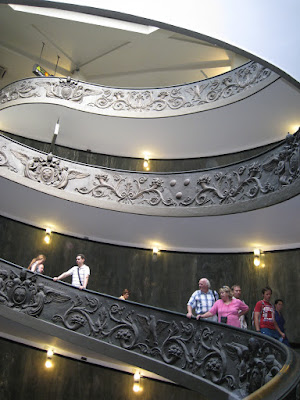 We see more modern art including a collection of work by Salvatore Dali. Now I want to return to that room also. I want a print of one work, the name of which I can't remember -- but I'm haunted by the intense red of it. John is struck by another of Dali's works titled "Angel's Passage," which just happens to be the title of his newest novel. An enormous statue seems to be emerging from the rock of earth, and I wonder if it is Michael. I couldn't get close enough to see. 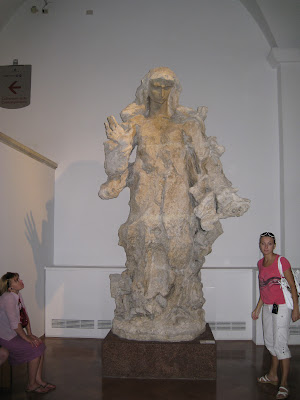 For years I've heard from time to time that if the Catholic Church really were interested in the poor, she would sell these priceless treasures and turn the money into food and shelter and other assistance. Maybe for a short while in my very young years I agreed with that. Now the notion seems to emanate from a materialistic kind of logic. The true wealth of these treasures lies in their ability to  inspire love and generosity, which is the spirit in which they were originally made and given. We are the ones, inspired by this art and beauty, who must be the gift and help to the poor. Outside of this context, placed in someone's home, or in a secular museum, the Vatican treasures would surely keep their artistic integrity, but they would lose their spiritual power to transform minds and hearts for generations yet to come. This, as I said, is the true Gold.
The Vatican, and the whole Catholic Church, may be wealthy in secular standards, but only in its holdings -- these antiquities. It's operating budget, especially now after all the litigation, must be very tight. Its true wealth, as always, resides in the souls of its people, like the beautiful and holy people we soon would meet when John and I joined the rest of the Pilgrims to Assisi.
At the end of the day John and I stopped at a restaurant, went inside and sat down. (This would mean the food would cost more. You pay to sit down.) The wine was smooth. The pasta elegant. The bill high. But look how pleased he is (and tired from the day.) 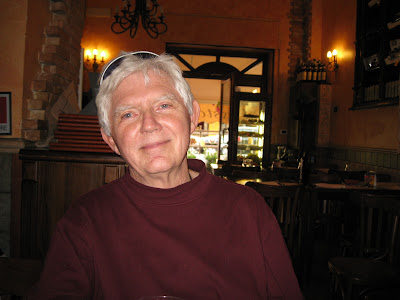