RETREAT AT LAVERNA IN TUSCANY 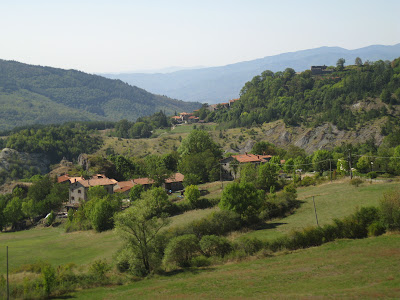 Before we left on pilgrimage, I told my friends I'd be at the tomb of St. Francis for his feast on October 4th, and I quipped that there would be a million others with me. Though I feel a bit claustrophobic in crowds, I thought such a crowd as this, all focused on the same awareness, could give off a spiritual energy in which I could participate. But it didn't happen that way, and I couldn't be more grateful. Instead, we all piled into the bus for Laverna in Tuscany to make a retreat in the mountain grotto where Francis was marked with the wounds of Christ--the phenomenon we call the stigmata.
We drove on steep mountain roads, around switchbacks, and gazed out at a landscape like that of a medieval painting. Sometimes villas graced the hilltops. 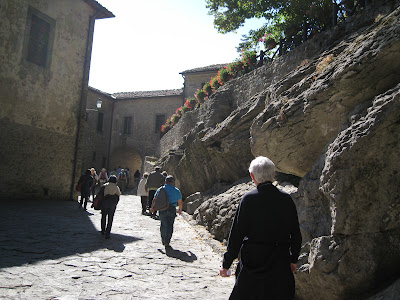 Up here, on Mt. Laverna Francis had a hermitage on land given him by Orlando, a wealthy nobleman. We'd been told to bring warm clothes to ward off a freezing wind that usually blows in October. But as we walked up the last bit of mountain towards the sanctuary the sun shone warm and bright. 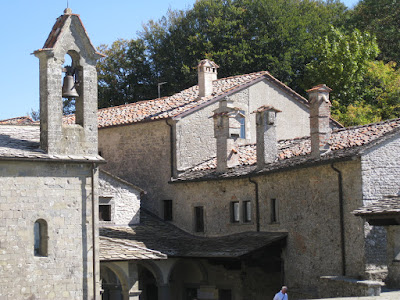 Back in 1224, Francis had just finished a forty-day retreat, praying and resting in a stone cave. He'd asked Christ to be able to share in his passion, and was pierced in his hands, feet and side by a seraphic fire. Reading of this from the classic THE LITTLE FLOWERS OF ST. FRANCIS OF ASSISI was something I hadn't done before the retreat, but have done now, and honestly, it took my breath away. The place is still "hot" from that fire. Was it the altitude that made it hard to catch my breath?
We descended into the cave of Francis, the place he made his petition. 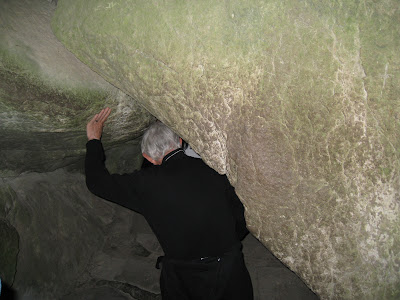 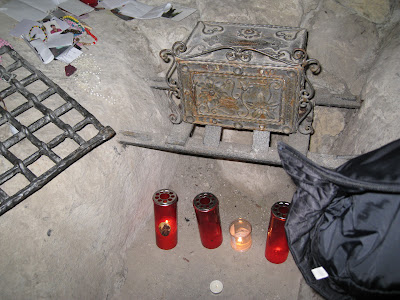 This is the actual hermitage. The grate protects the stone bed on which Francis slept. 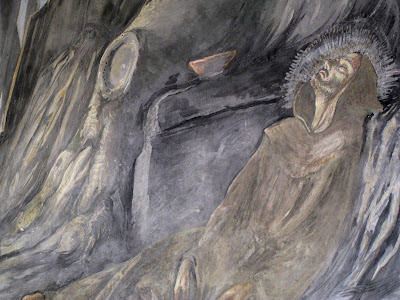 A painting of Francis contemplating/praying in the cave 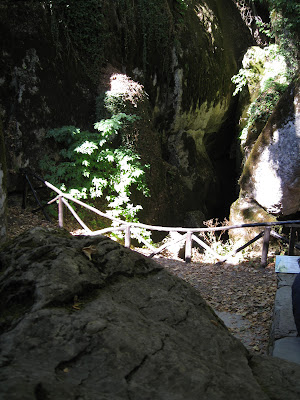 Light catching the edges of a gouge in the rock 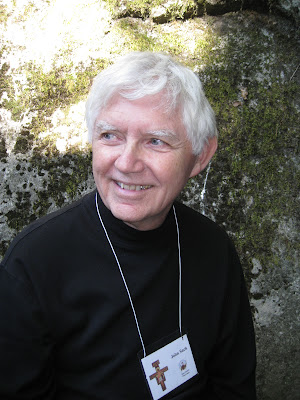 John leaning against the rock at the precipice
We stood on a precipice where it is written that he was tempted, as Jesus was also tempted on a mountain, and then was saved from falling when he called upon God.
I can't do this. I don't know enough to do this. I know what I felt in that place. I felt fire in my heart. What is that? I absolutely do not know. What are spiritual experiences themselves? I don't know that either. They aren't emotional. They aren't cognitive. They can't be personally caused regardless of the perfection of techniques such as special breathing or postures. One author I read posits that such experiences are psychosomatic reactions to the touch of God -- the Divine Touch itself cannot be felt, but the body cannot help but respond, even in quite dramatic ways.
What did Francis feel that resulted in those bodily wounds? Was it the same thing that St. Paul felt which caused him to say, "I bear the marks of Christ in my body"? Other than Paul did any stigmatic exist before Francis? I don't remember being told of any. But during just my lifetime there have been--how many?--I think hundreds. Does the body respond to that suggestion once the mind is aware of it? 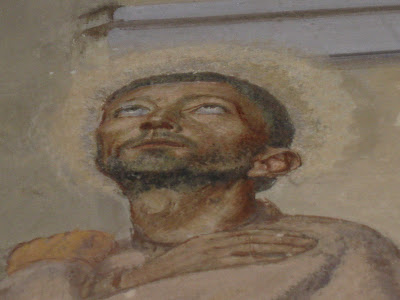 Does it matter?
"Deus meus et omnia" Francis cried as the Divine Fire pierced him. The words are in gold above the chapel of the stigmata. "My God and My All". I stood in the long hallway afterwards, after the procession had wound towards that chapel singing the litany of Mary. Why Mary? Because she said "yes." She said, "Behold the handmaid of the Lord; be it done to me according to Your will." Francis also said "Yes." The obvious question: will I? Every moment, will I?
The invocations of Mary's Litany rang out in Latin: Rosa Mystica --Mystical Rose, Vas Spiritualis--Spiritual Vessel, Vas Honorabili--Vessel of Honor, Domus Aurea--House of Gold…
A voice in my mind murmured, "Weren't you once going to write a meditation book on these invocations?'
"I was."
The voice again: "It's time."
Yes. Yes, it is.
Email Post
Labels: LaVerna Pilgrimage spiritual experience Stigmata