I woke up alone in bed. It took a moment to remember where I was. The thick drapes closed out all light. "John?" The bathroom door opened. He'd been awake since 3:30 A.M., had showered, washed some of his clothes, dressed, and was antsy to get going though it was only 6:30 in the morning and still dark outside. I'd worn earplugs, he had not. Jet lag and street noise have their consequences.
I showered, thankful for the water that spilled from the shower head onto my sticky hair. I dressed, and opened the drapes to witness the shining Roman morning and watch the stream of people leaving the commuter train and grabbing the bus or their motorcycle to go, one supposes, to work. Men in suits strapped on their helmets, engines roared. I was in Rome--the common people's side of Rome. The sight of St. Peter's was only about five hundred yards away, but I could not see it. I could see large blue cranes towering above a construction area, the buses, the trains, and houses climbing the hills--each balcony with its plants and flowers, moments of green beauty. In the background stood a tower and an old wall which might have been boundary of Vatican City. 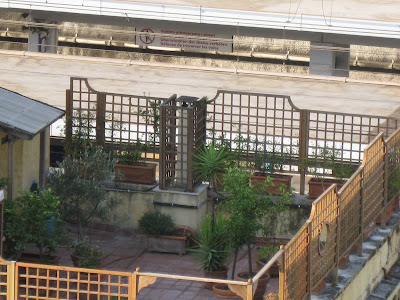 Balcony across the way
We would see sidewalk venders along that wall during the day to come. They get angry if one tries to take a picture of the wall, supposedly because they might be included as part of the scene. One gave me 'the finger' and ran into the bustle of people. Did he think I was trying to steal his soul? Was he in the country illegally? They spread out their Gucci purses on the cobblestones. No one stops. Where are these men from? They appear to be from Somalia. Are they like indentured servants to some illegal company? But the police are everywhere; what they are doing is no secret. It was a curious phenomenon. 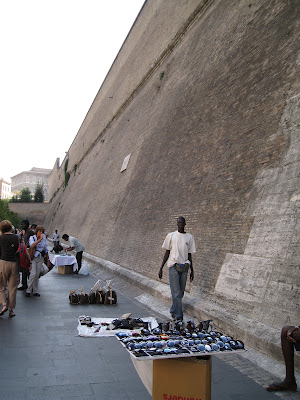 Wall with its street vendors
Right inside the wall is the Vatican. It's amazing that the church with its wealth of the ages would be nested in the squirm of poverty. I want to make meaning of this, but perhaps there is no meaning to it except for being human. Imagination can bestow meaning, but what would be the reality of it? All these thoughts crowded my mind. Poverty and noise and insult outside the walls--inside: gold. I know this is nothing new, no original insight. But standing there I found the paradox overwhelming not just to my mind, but within my heart. 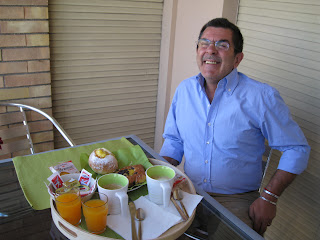 Vincenzo
On that first morning when we were about to leave the tiny room to find breakfast, Vincenzo arrived to open the door and shutters leading to an actual balcony on which was a glass-topped table. He let us know that we shared this space with the man staying in the adjacent room--Omar, a friend of his from the Marches section of Italy who works in Rome three days every week. Vincenzo brought two roses for the table, cappuccino, croissants, toast and jam, and we sat down in the sunshine above the noise of the streets which seemed by then to have woven itself into a kind of urban harmony. We talked with Omar who worked as an I.T. person with a computer company there in Rome. His command of English was good, and John had spent hours of many days studying Italian, so between the two of them we heard stories of the Marches where we would visit later in the pilgrimage. 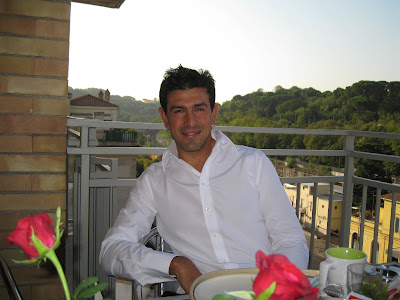 Omar
Don't pretend, I told myself as I lifted my eyes up to the hilltops where I could see a unique church with an aqua colored steeple. I was scanning the horizon for beauty. But below the balcony beauty not only stood, but walked, emerged from trains, roared off on scooters and cycles, sat on benches waiting for the right bus, drank coffee, and called to friends in the bustle of the city. 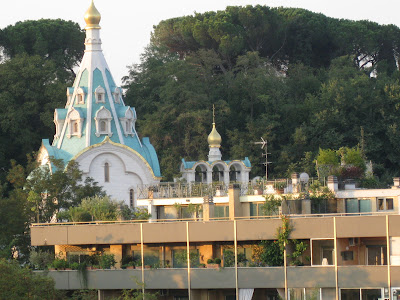