A DAY IN FIUMICINO 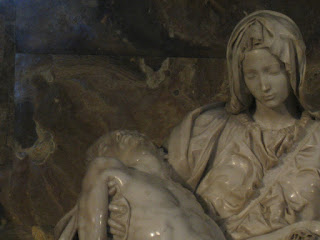 Vatican gold won't leave my mind. Last night I took out a book given me by a dear friend a few years ago. It contains gorgeous photographs of the Vatican, breathtaking shots of much we had seen and much more that we had not. "All that gold," the mother's song from Amahl and the Night Visitors streams through my mind, the aching soprano tones, "oh, what I could do for my child with that gold." Even the book in my hands is trimmed with what resembles gold. Bret, our pilgrimage leader, reminded me that Pope John Paul II requested that Mother Theresa's sisters establish a house for the poor close to Vatican City. "It is on the south side where you were staying--the poor section." And last night, when I turned a page, I saw a picture of one of the Sisters of Charity beside a door I was pretty sure I had walked past on the way from the Vatican to little St. Pietro's House. Three pages of this book of gold had been devoted to their work in Rome, feeding, giving shelter and medical care to the poor.
This morning we prayed the Divine Office honoring St. Luke, the writer of the Gospel bearing his name. Much of the imagery was that of the heavenly city with its golden streets and jewels, and the saints of that city of whom it was written:
"You are like sparkling gems on high
Reflections of the Lamb's own light,
The stones on which Christ built his Church
That we might reach God's vision bright."
Of course! I thought. All this gold is our feeble attempt to express that heavenly city in the core of our souls. And it is the poor who walk there. All of us, really, who are poor in some way or another. And we are the sparkling gems that line the streets of gold. The kings in the opera about Amahl sing: "Oh woman, you can keep the gold. The child we seek doesn't need our gold. On love alone he will build his kingdom, and the keys to his city belong to the poor."
We do our best to express what we hold most sacred.
But I was going to write about Fiumicino. It was October 1st. After breakfast Vincenzo dashed out into the street to hail a taxi for us, and we were off for Fiumicino. Our original plan was simply to stay near the airport for greater ease finding our pilgrim companions the next morning. In half an hour we were at Hotel La Villetta with a whole day to spend in a little fishing village where the Tiber River empties into the Tyrrhenian Sea. 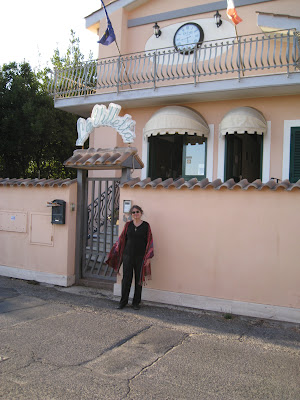 After settling in at our lovely little hotel with its personal patio shaded by lime and olive trees, we did some wandering. In town the streets were transformed into a marketplace, and we wove in and out among the tents and tables of food, clothing, and wares. 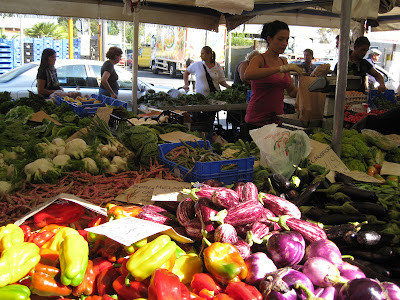 On the other side was a main street with a café serving delicate pastries, various Italian coffees and gelato. We had some of each, and were visited at our table by a drum playing Somalian man with a kind face and a pocketful of little African elephants and turtles that he gave away as gifts. His dream was to come to the United States and get a job. 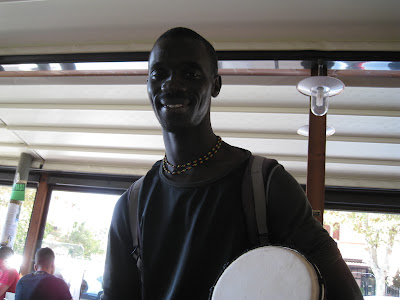 We moseyed back to the hotel, got lost, and ended up by the river. 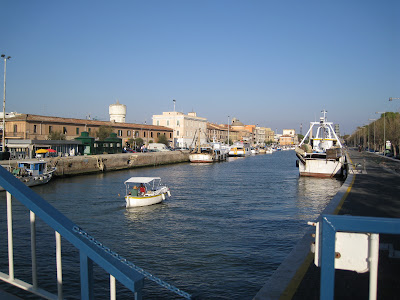 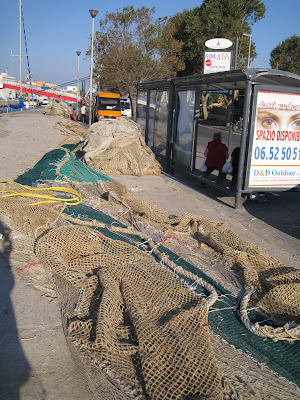 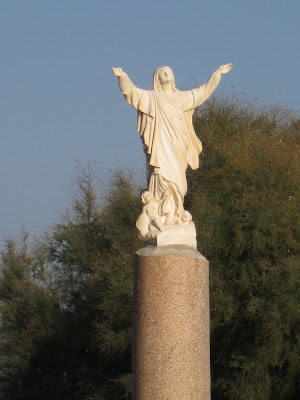 Mary, Star of the Sea, at the entrance to the river. 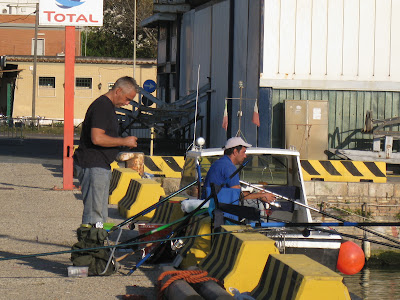 Fishing from the Wharf
My life had its beginnings by water--the Rainy River and Lake of the Woods in Minnesota. The natural world is my environment. Cities wear me out. Fiumicino made a restful transition from Rome to Assisi and I'm remembering it with delight at the same time as I feel Assisi pulling at my heart again, as it did the nearer we came towards it. And then, once we were there, it increased its magnetism. What will I feel when I begin giving words not just to the outer journey, but the inner one as well? 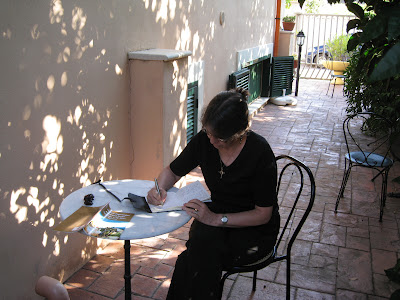 Next: Pilgrims on the Road to Assisi
Email Post