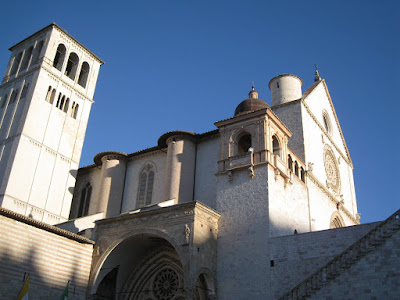 The Basilica of St. Francis in Assisi is a magnificent structure fronted by an enormous square (on which we first saw the Beggar of Assisi). Inside are frescoes of the life of Francis painted by artists of the high Middle Ages such as Giotto. Here also is an ancient portrait of Francis, the only remaining fresco by Cimabue, supposedly the closest likeness of him that we have.

The pilgrims and art enthusiasts moved around the cathedral with heads tipped back, straining necks. Our small group was blessed to have Alex's vast knowledge and appreciation at our disposal. An amazing detail is that the construction of the lower church had advanced far enough in two years that Francis' body could be moved here from its temporary resting place. Again, taking pictures inside the church was forbidden, but if you are curious, you can find images on the Internet.

Beneath the main church is the chapel of St. Francis' Tomb. Somehow Bret, our pilgrimage leader and organizer, was able to arrange for us to celebrate Mass there. "In all my life," commented one of the pilgrims, "I never imagined I'd have a chance to receive communion right here, at the very tomb of St. Francis!"

It's an intimate space, almost as if carved out of the stone of the mountain. Here's a photo from the BBC, taken just after the first restoration in 800 years was completed this April. 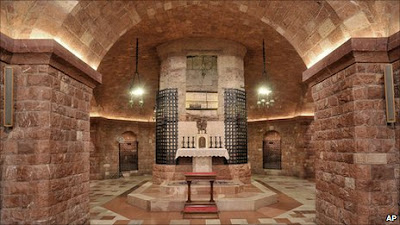 Here words fail. What IS it about St. Francis? From where comes this falling away of all but God?  It feels as though we are taken into his spirit, somehow, becoming more than we are. This sense has been felt through the ages. You can see it in the frescoes: a consistent comparison, almost an identification of Francis' life with the life of Jesus. But it becomes personal--an "I am That" of the eastern traditions. Father Jose stood at the altar, his back to us as it would have been in the pre-Vatican II church. That felt right, somehow, even though I've spent much of my life studying and promoting renewal in the liturgy. The priest, in this instance, felt to me like the point on a wedge of wind, of spirit, bursting out of the community of pilgrims with Francis, as Christ, into the Divine Mystery of God. Once again I wept. What a strange phenomenon, these tears that just fall and fall without the accompanying sense of crying.
After Mass we walked with other pilgrims around the tomb. The tombs of his closest companions also are here, circling Francis. The tomb is not of glass, unlike that of St. Clare, showing a facsimile of the living person. Francis' remains are enclosed in stone. One pilgrim lightened my mood by quipping: "you know why Francis was buried in stone rather than glass?" No. "They didn't want people to see him turning in his grave." Oh. OK. The little poor man of Assisi, stuck til the end of time in one of the greatest basilicas in Christendom.
Life is irony. It's a symbol, of course. This beauty all around his memory comes about as we try to articulate heaven, just as the book of Revelations with its golden and jeweled streets is also trying to articulate heaven. But we can't. We really have no words for that. We get a taste of it from time to time. Francis felt it in a cold cave in the mountains, in the kiss of a leper. What kind of irony is that?
Later we walked along the streets of Assisi, up to the main town square and the temple of Minerva, then spread out to enjoy the Saturday market and to find lunch.
Email Post
Labels: Assisi Pilgrimage spiritual experience St. Francis