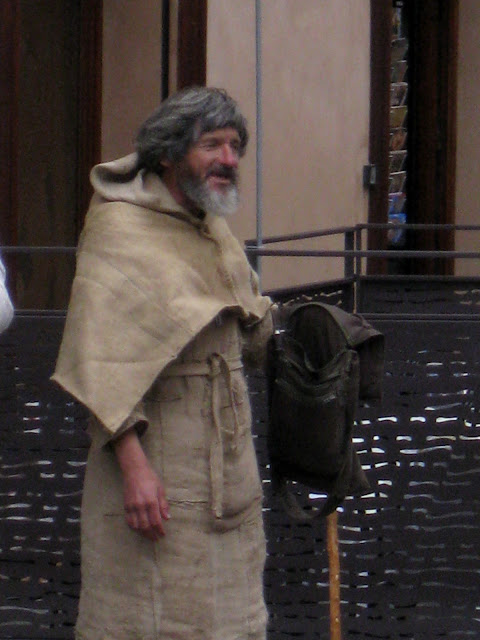 This man wanders the streets of Assisi, smiling, crying out the Word of God, and carrying a knapsack for alms, though he blesses both those who give and those who do not. We saw him during both our visits to the town. Was he a charlatan, a fanatic, or a true and radical follower of Francis? "Ritorno a Dio!" he kept repeating. "Return to God." Wasn't that what Francis used to cry out?

I noticed that most people pretended he wasn't there and went on with their tourist activities. Of course one can't give to every beggar. (There were many, both in Assisi and in Rome--some of them with bodies twisted beyond comprehension.) This one, though: Who made that sackcloth robe for him? Shouldn't he have a bowl instead of a bag? But then, Francis asked for money, didn't he? To rebuild the church. If we gave freely to anyone begging on the streets, would everyone leave their jobs and homes and take to the streets? I don't think so. I think it's hard work to beg, especially if you have to do it every single day. It must become like a form of work, not all that unlike being a census taker, a bill collector, a lobbyist on the Capital steps in Washington. And if your work clothes itch -- well. . .

What if he was the best thing in Assisi? Wouldn't we have struck up a conversation with him?

How does one tell a crazy person from a saint? I watched the Assisi Beggar climb the steps behind the Cathedral of St. Francis. "Return to God; Return to God!" He wasn't "normal." What saint has ever been normal? They are trans-normal. Francis went down the mountain to care for the lepers while everyone else was striving to go UP. "He's crazy," said the townspeople of him. He slept on rocks in caves. Afflicted with sores and blindness, he called his situation one of Eternal Joy. His heart burned with Divine Fire.

The other day I was reading a book that had nothing to do with Christianity. The author mentioned St. Francis of Assisi, calling him a turning point in the development of western culture, the first of the truly individuated persons. Up to then the collective had been primary. Francis bridged the times for us. In the stories we have images of him walking on the edge of the precipice in Laverna (like the archetypal Fool who sings and dances blindly on the edge of a cliff--the image of beginnings, of transformation)--images of him crossing the mountain gorge on the trunk of a tree blown down for his passage. He is the transitional man. (In his day many transitional men and women were executed for heresy.) Francis dodged that by his simplicity, candor, humility, willingness to be transformed.

Or -- so it seems to a novice of his Way which is (he would insist) the Way of the Christ.

This morning I'm just thinking this out, not even writing it in Word beforehand and pasting it into the blog. Just letting my fingers do the talking. First I pasted that picture in, and off went the fingers on the keys. If I sound crazy, maybe I am...

unlike Francis who looked crazy to so many, but was not. Yesterday I was reading an analysis of Beatrice of Nazareth, another mystic of the time of Francis, but spending her life in a Cistercian Monastery in Belgium. Scores of men and women across Europe in that era reported mystical experiences. Visions, sensory manifestations, the audible voice of Christ, etc. So the author asks the question I asked: how do you know they are sane? His rule of thumb is "how do these people act when they are not in the throes of a mystical experience, not at prayer, not in contemplation?" All of these people were not only functional, they were brilliant in their abilities to accomplish their work, to relate to others with compassion and good judgment, to take their place in the pattern of their social network, do be patient in their own trials, and the various other characteristics of a healthy, mature personality.

And what's not sane about the cry of the Assisi Beggar?  "Return to God." I, for one, when I look at the world these days, think that's pretty good advice.
Email Post
Labels: God Mystics Pilgrimge Sanity

Your Friend Aaron said…
Hi there! I was doing a little poking around for my writing about my own recent pilgrimage to Assisi, and found this.

I met the man you're writing about here, and mentioned him in my own story! http://frateraaron.blogspot.com/2012/01/il-barboni.html

His name is Brother Masseo.