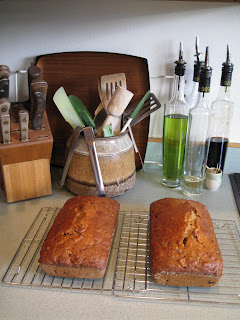 Ken called early to say “Don’t drive down your road; it’s slick out there.” Just in case I wasn’t thinking about the freezing rain we had last night, or how it felt to step out onto the back deck, or how Mo slid while running, or how winters used to be in Minnesota. Here, though, I have the curvy hill, on which the four-wheel-drive would not grip the ice, and I could find myself airborne out past the road and into the field. So I’m making Mama’s date bread instead of going out anywhere at all.

Mama’s Christmas date bread is an argument for evolution. I started out almost forty years ago attempting to make this delicious concoction exactly according to her scribbled recipe--something tricky in itself because in her haste she wrote some of it in shorthand and failed to give directions (only ingredients). Young enough then, I could remember standing beside her as she baked, and so I think the results matched hers.

When I came to California with John the first change happened because I couldn’t keep him from cutting into the loaf right out of the oven. Mama always insisted that it be wrapped in foil several days before cutting so that the flavors would combine. But lo and behold, it tastes great right out of the oven, and besides that, the crust is --- crusty.

Then a few years later John said it would taste better with orange zest as part of it. OK. And I also used orange juice instead of water. A BIG improvement.

This fall I added cherries and grains to the dates and nuts, and used Agave rather than sugar to lessen the glycemic impact. And voila! Another culinary success.

Today I included some sesame seeds (but I forgot the orange juice--phooey!) and softened the grains before adding them. As I write two loaves are in the oven. I plan to give Ken a loaf for thinking of my safety---though I may need to wait until the ice melts.

(and just in case anyone should decide to try this: soak the dates in the hot water, mix wet and dry ingredients separately, then combine. Add the dates and nuts last. Bake at 350 for about an hour.)

Christin Lore Weber said…
Would you look at that! Mama forgot to mention the dates!!! You have to cut up about a cup and a half of them to soak in the hot water.
December 12, 2009 at 7:57 PM

Helen said…
I love making sweet breads at Christmas and will enjoy trying this recipe, thinking of you, your Mama and mine. What great bakers most of them were. My children used to load the sled with wrapped breads and deliver them to all the neighbors on Christmas Eve morning. Thanks for triggering such fond memories and for the recipe. I love reading your stories.
December 15, 2009 at 5:34 PM