SURPRISED BY THE LIGHT OF SOMETHING NEW 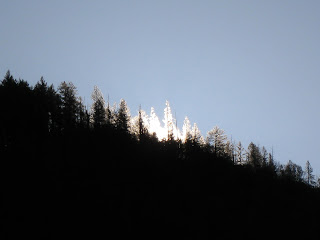 Light rising over the mountain outside my window transfigures the tall pines as though the mountain is Tabor and I am witness to something beyond my understanding. This makes me think of Agnes whom I met just yesterday. After the Mass of Rejoicing (Third Sunday of Advent) I attended a celebration luncheon for Eileen who, for over ten years, coordinated the Outreach Ministry for Eucharistic Ministers to the Homebound, and has recently needed to resign. What brought me there was a powerful inclination towards doing something new when I read in the church bulletin of their need for more ministers. That was in the beginning of November, and since then I’ve been meeting the people, being trained, and am looking forward to being “commissioned” at Mass this Wednesday. Joyce, the parish coordinator of ministries, thought that Eileen’s celebration would offer a good opportunity for me to meet the other Eucharistic Ministers.

While I was exercising my short term memory on names, an exuberantly friendly man--Don--pointed across the room at a thin taper of a woman with hair like a white flame. “She used to be a nun,” he confided with a mixture of secrecy and awe. I looked over the Christmassy luncheon tables at her and then crossed to where she stood.

She actually looked like a nun, like a carving of an old nun’s face in marble, smooth, the lines of age providing artistic enhancements. She also looked like your seventh grade teacher bringing order to the class on a Monday morning. She revealed nothing but being.

“Which community?” I ventured again.

“Sisters of Notre Dame.” Still that marble look. My imagination dressed her in the traditional habit of that community, the heavily starched linen under the veil that one Notre Dame sister once told me acted as blinders, so it was difficult to drive.

“I was a Sister of St. Joseph.” I could tell I was beginning to ratchet up my energy. “What’s your name?”

“Agnes,” she said, and I pointed to me saying “Christin.”

More questions, then: trying to situate us in the history of the exodus from convents back in the Sixties and Seventies. It turned out that she wasn’t “called forth” from her religious community until about ten years ago. How old was she? What kind of courage must setting out on her own have required? Certainly she was past retirement age. “I knew from the beginning that eventually God would call me forth from there into something new,“ she smiled.

That realization may have been what did it. Or something else did it. Who can say what does such a thing? Light burst from her eyes. Some kind of opening to kindness, to wonder, to joy. Her whole being became an Advent Moment.

Looking now at the sunlight, I smile too, and think of how wonderful life is as we are constantly being called to something new, and how we can’t anticipate what surprise of light might dawn in the next moment, or how beautiful it will appear when shining out at us from someone else's eyes.