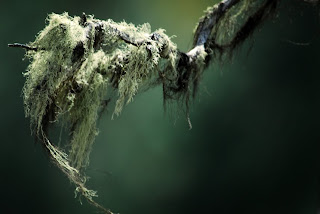 Here it is, Friday already, and only now am I posting the writing from the Feast of St. Nicholas. My satellite was out that day until evening. Just now as I was getting my mind in gear to write another little missive, I realized that this one never made it out of my hard drive.

Thanks to my dear Krista Karels for the photograph of moss on one of my winter oaks.

The Hughes satellite penetrates the heavy clouds of this morning only sporadically. The temperatures rose, though, during the night, for which these same clouds are probably responsible. (This is some weather-wisdom gleaned from John over the years). A few minutes ago the blue lights on the Hughes equipment indicated that I had a window of opportunity during which I did get nine emails, then the signal blinked out again. It could be snowing on those mountains to the south. “All you need is an unobstructed view of the southern sky,” say the commercials from Hughes. Nobody says anything about clouds.

Here on my little mountain I depend upon my various means of communication. It’s the Internet that opens my way into the larger world each morning. Today, though, it’s fine that snow might be blowing in over the coastal mountains possibly strengthening my hermit status, because last night was one of people, lights and song. Each year a contingent of folks from Buncum (the little ghost town a mile down the road) attend a musical performance at the Craterian Theater in Medford. The same group -- The Trail Band -- has been coming here for fourteen years, and my friend, Connie, had an extra ticket. Beforehand these neighbors of mine, most of whom I have either never met or know only slightly, meet for wine and a potluck of yummy snacks in a room above the lobby of the theater.

Beforehand, though, Connie and I stopped at the Medford Armory for a Christmas tree extravaganza and music offered by young people from high schools in the valley. I learned that the newest in decoration is an upsidedown evergreen. A first for me. “That’s just wrong!” I commented. But later, at the theater, I saw another one. My eye, now a bit more accustomed, found that one a bit like an enormous vase with fluted top. The Buncumite standing next to me allowed that the decorations really were more visible with the bottom at the top.

The Buncum people have come from everywhere, many of them in the last fifteen years. Connie, of course, has lived around here forever. One couple had lived a long time in Minnesota. Ah, old home folks! Many had been city people: San Diego, Chicago…. Now they devote their time to their arts, their ranches, environmental work.

The Trail Band name makes it sound like a western group, and although Connie kept saying that wasn’t really what they were, I realize now that I didn’t believe her. It surprised me to hear them playing and singing what really were Christmas folk songs from around the world, Spanish, Celtic, French, Old English--sprinkling in some Nutcracker Suite featuring the hammered dulcimer.

It’s snowing now. The satellite still blinks on and off. I probably won’t get this sent until later, after I get back from the Mass for the Second Sunday of Advent. Probably the mountain roads will be slippery, But hey--I’m a Minnesota girl. And besides that I had several years of winter driving in mountains all the way to Portland and back. So no excuses for hunkering down in my warm house. It’s my favorite time of year.

Cookie said…
Dearest Christin,
I loved your comments about Buncomites and Trail Band. It was a fun evening. I guess I will have to hike up Sunshine Hill for a visit. For some reason, this season has been "party time" and now I am "party-d out".