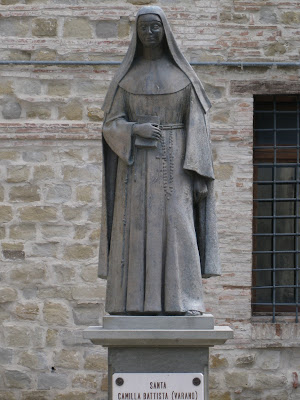 From Rivortorto we drove eastward through the Apennine Mountains into the Marches of Ancona to stop at the little town of Camerino and the Poor Clare Monastery where St. Camilla Baptista da Varano lived during the 15th century. She was canonized only in 2010 by Pope Benedict XVI.

I'd never heard of her before, and don't quite know what to make of her now. It's significant that the nuns worked all these centuries to have her recognized. She'd been a Renaissance illegitimate daughter of royalty. Her royal father had a great fondness for her, however, and when she decided to leave the courtly life to enter a monastery, he had this particular one in Camerino built for her. Later he and his family had become ensnared in political doings with the Pope--a Borgia--and ended up victims of a violent murder. When the pope attempted to annex Camerino, she was forced to flee into the Kingdom of Naples until a new pope was elected. Her writings contain nothing of these events, and she was known for her loyalty to the papal office and a heart able to forgive even the most heinous of crimes. The focus of her spirituality was on the sufferings of Christ, the cross, and the Divine Heart burning with love for the poor. I'm hoping that all of her writings will soon be translated (I found only one in English on the Internet). Apparently she had intense mental struggles, and I'd like to know more about that. 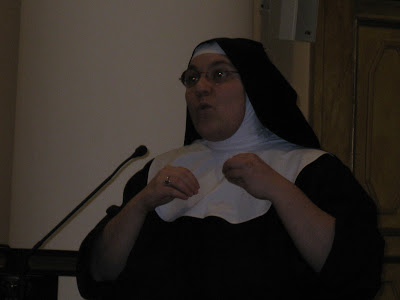 One of the four sisters still living at the Camerino monastery talked with us about St. Camilla, then served us a lunch of pizza and Italian cola. (It's neither Coke nor Pepsi nor like them in any way I could discern. It leaves a medicinal taste along the side of the tongue)

From Camerino we continued on to San Severino to visit the Poor Clare's there. This community has a Francis-story connected with it. He saved a lamb from among the goats and carried it to the sisters living there. They cared for the animal and made a cloak for him from the wool. Later the group of women became Poor Clare's. It isn't often that people on pilgrimage are able to relate so closely to the women in these monasteries, but our organizer, Bret, has known them for years and seems to relate to them as family.

We were led into a visiting room. Four nuns sat behind a grill and one of them spoke for about an hour about life in their community, and also about her own experience of vocation to this life-style. She was animated, articulate in English, and very young. 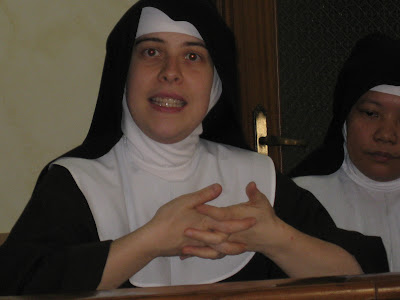 Afterwards we joined them for Vespers chanted in the chapel. They were in the choir section of the chapel, and we prayed in the public area, but we could see one another. These twenty-five women had been singing together for a long time, and their voices blended so beautifully that I started to cry AGAIN! It's true. I do continue to carry nostalgia for the beautiful parts of my early years in the convent. Probably it is nostalgia for the dream of convent life that I had when I entered, and of which I experienced some fulfillment. John leaned over to me and whispered, "Do I have to leave you here?" And I shook my head, no, even though my heart felt on fire with the same youthful longing I experienced when I was seventeen. "We have our own monastery on Sunshine Hill," I whispered back. (of course, the two of us can't sing like that!)

We waited in the courtyard until dinner time when the sisters served us a feast. Turkey, tomatoes from their garden, soup, pasta, salad, fruit, home-made wine, home-made brandy, tiramisu.

One rather scary thing happened there: Before going down the hill to catch the bus back to St. Mary of the Angels, several of us lined up at the restroom off the convent parlor. The men went in and out--no problem. The first woman who went in came dashing out, waving her arms, "There's a SCORPION in there." I was next in line. "Where?" I questioned. "Above the door." She shivered. Aha! The men had their backs to it. I thought of a little scorpion I'd seen in Florida--a skinny pink thing--and went in. Yes. There it was. Above the door. Black and fat. How fast do they run? Can they drop from a thread like spiders? It's little right claw moved slightly to the right. I simply had to use this facility!! It's black tail curled up around its fat body. Oh dear. Finished, I opened the door slowly, then edged out. Safe.

Afterwards I thought how a building hundreds of years old must be hard to keep up. I wondered if there are lots of those around San Severino. I suppose there are; it's high desert. I wondered if people ever get used to them? Probably they do. I have cousins in Arizona, for goodness sake!