IN THE PRESENCE OF THE SUN AND THE SEA 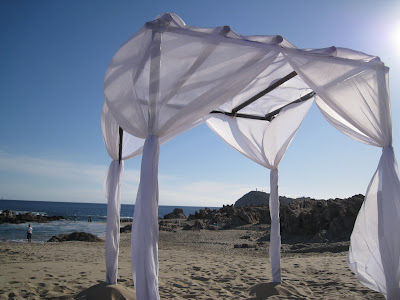 The still empty canopy awaits the bride and groom. Bree and Patrick's family and friends mill, barefooted in the fine sand. I take a few pictures with my camera, and then just as the wedding party starts down the path to the beach, I am handed a small camcorder.

YIKES! I thought I'd have a chance to learn how to use this thing. The night before I had agreed to take a video of the procession and wedding. Bree's mom and dad would be in the procession. I was an obvious choice, even though I didn't know how to operate the camcorder. At that time I figured there would be time to find out. "I'll need about ten minutes," I'd warned, but they were already descending the steps. First bride's maid -- missed her.  Second -- missed her too. John and Bryana stood at the top of the stairs. I grabbed Rachel, the wedding planner. "You have to take it off standby!" She reached over and clicked something. I hoped I was getting a picture. Linda had said there was a zoom lens. Where was it? How did I get myself into this? At least there was a professional photographer there for the still pictures. I sat for a while with the camcorder trained on the wedding couple and their minister. My liturgical critic told me he was doing a great job. John suggested I run around behind the canopy to get Bree's face during the vows. Oh Lordy! It would be like running across the back of the stage during the theatrical climax of SOUTH PACIFIC. I did it anyhow. The great irony would be if, when I ask Bree how the video turned out, she would say, "What video? It was blank."

So today when John asked if I planned to write the blog about the wedding, I demurred a bit. I know he wanted a beautiful, descriptive little essay. And I had glimpses of that loveliness during my virtual Carol Burnett act. But I have no pictures of the ceremony in my camera, and also no memory of the ceremony except what appeared on that little screen. Oh, and did I say that I was sitting on the bride's side? This meant that the sun was in my eyes and also in the camera lens. The whole thing, from my perspective, a comedy of errors.

This I do know: Bryana could have been the cover for the next BRIDES magazine. She was that beautiful. She was radiant. Patrick's eyes were proud and loving and grateful all at the same time. 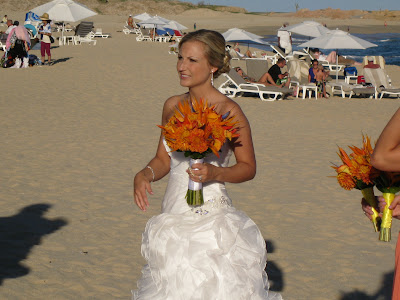 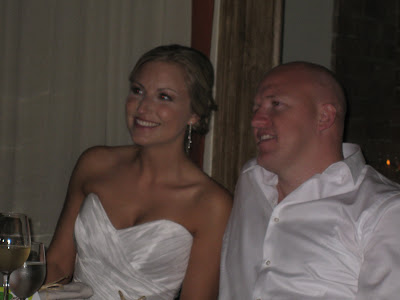 The guests had a great time -- 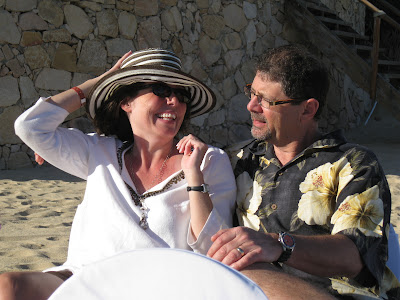 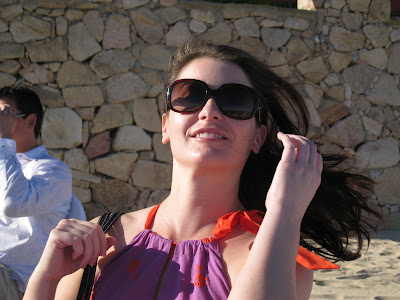 And from the rehearsal dinner to the setting off of a fire-lit balloon into the night sky, Bryana's whole being seemed full of light. 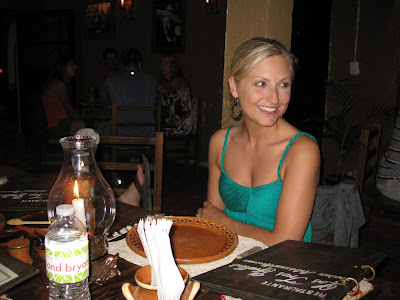 There was one bit of the wedding ceremony that I actually heard, saw, and that stays with me. It is a snapshot I wish I could give you, but there's too much to it. It couldn't have been captured on the camcorder even if I'd been able to make it work professionally. It was a moment composed of the wind, the sunshine, the look on the faces of the bride and groom. It was a moment of blessing by the minister they had chosen who seemed to know with his heart all the words to say to them and to the rest of us. He called us into the presence of being itself. The presence of the sun and the sea, of family and friends, of the Holy One who made all of this beauty along with the love that binds us one to the other. And with this presence he blessed Bryana and Patrick -- children of all that we are--that all of us were that afternoon on the sand, by the sea of Cabo San Lucas. At that moment they represented the best of humanity, the best of what we are capable. They represented the love that we can see when we look deeply into anyone's heart, including our own. That is why, afterwards, the women were weeping with joy and the men were looking so proud. Because we SAW ourselves again as if for the first time. We saw what we can be and can become. We wanted to touch them, to stand before them, look into their radiant eyes, hear the words they speak, remind them of their times with us. At the reception people DID that. "I've known Bryana since the beginning, since 4th grade!" proclaimed her friend from Bandon.
So this is what a wedding is, and this is why we celebrate. This is why we attend. This is why friends and family flew all that way. Because this is what we are in the universe, isn't it? We are the creatures who agree to the union of hearts and souls, to the marriage of opposites--man and woman, fire and water, wind and sand, human and divine. And for a moment, there we are, in the center of that realization, in the perfect flame of that love which, as Dante sang, "moves the sun and the other stars."
Email Post
Labels: Cabo San Lucas Wedding.