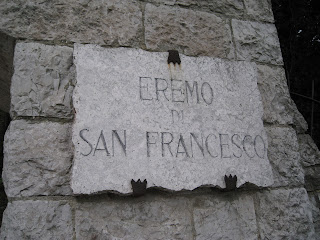 On a blustery Friday we took taxis high up on Mt. Subasio to the hermitage of the Carceri. Here St. Francis and his close friends spent months at a time in solitude, praying and communing both with God and our "brothers and sisters" found in nature. He wrote the beautiful prayer of gratitude for creation. 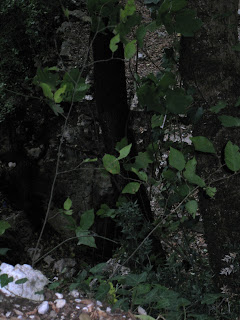 Praised be my Lord God with all creatures,
and especially our brother the sun,
which brings us the day and the light;
fair is he, and shining with a very great splendor:
O Lord, he signifies you to us! 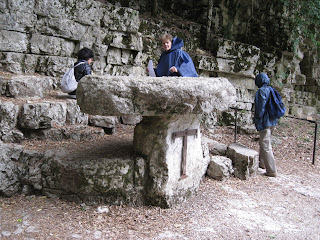 Praised be my Lord for our sister the moon,
and for the stars,
which God has set clear and lovely in heaven.

Praised be my Lord for our brother the wind,
and for air and cloud, calms and all weather,
by which you uphold in life all creatures.

Praised be my Lord for our sister water,
which is very serviceable to us,
and humble, and precious, and clean.

Praised be my Lord for brother fire,
through which you give us light in the darkness;
and he is bright, and pleasant, and very mighty,
and strong.

Praised be my Lord for our mother the Earth,
which sustains us and keeps us,
and yields diverse fruits,
and flowers of many colors, and grass.

Along the pathways here are several caves in which the friars sought solitude with God. Bronze statues of Francis and two other friars capture their absorption in the earth and sky as though through nature to find a path to the Transcendent. 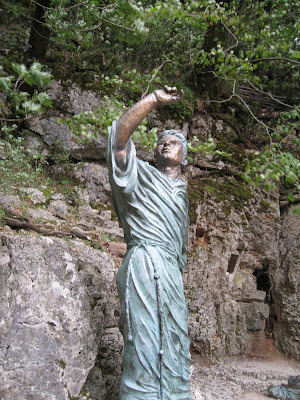 During the years that I lived alone on Sunshine Hill friends warned me against "becoming a hermit," as though there might be something dangerous about such a life style. And I recognize that there are dangers of being too much alone--self-absorption being one of the chief among those dangers. The person who becomes a hermit to "just get away from it all," is in danger. But in a world such as our modern one, with its fast pace and constant noise, a positive balance becomes a necessity. Some, like Thomas Merton, still are called to give this balance to the rest of us. There are others, much less visible in their solitude than he was because of the writing he was also called to do, who lead positive lives in solitude. What makes this hermetic life positive, I think, is the inner direction it takes of being focused on something so much larger than the self. Knowing oneself as part of the whole world, its destructive aspects as well as its creative, the hermit can lift up the self in surrender for that world, can enhance the consciousness of that world.

In an individualistic era like ours, it can be difficult to see how some guy living in a cave and talking only to God can affect me in even a small way. But what if every thought we have actually does vibrate throughout the entire fabric of being, and we aren't such individuals as we thought? Then in solitude we would not be so alone. Instead we would have the contemplative experience of realizing our connection with everything. Brother Sun, Sister Moon, Brother Fire, Sister Water, Brother Wind, Mother Earth. Brother You, Sister I. And the same Breath in and through us all.