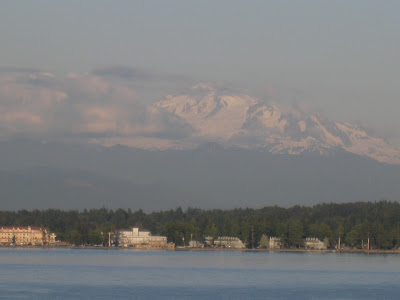 Today was a writing day. John worked the entire day on his new novel, and I began the day by uploading my often revised novel, GYPSY BONES, onto Kindle. "YAY!" I shouted into the next room. "It's DONE!" Had I learned nothing from my reflections, just yesterday, on planning? No sooner had I shouted "YAY" than I checked my email to find one from my dear friend and poet, Kath. Some weeks ago I'd sent my manuscript to her for review, and she had done just that. She sent an attachment of her marked-up copy and we spent way over an hour on the phone discussing her keen observations.

I remember the first time an editor made a suggestion about my writing. As I recall it was one of those key rules: to show not tell. "Don't say that Elise loved God, show us Elise loving." Well, "Elise loved God and it was shameful." was the first sentence of the book. I was quite attached to it. (Authors do get attached to little phrases they hear in the middle of the night--phrases that seem to hold the secret of the entire book. I've been known to grab a pen and jot them down in an idea-journal by the side of the bed. They look really scribbled and odd in the morning.) Anyway, I turned cold on that editor. I argued with her. I lost her. She said I had to learn a thing or two, and she was right. There have been lots of editors since that shameful exhibition of mine, but I still miss her and am sorry.

Public confession finished. Today I felt eager to hear what Kath had to say, and afterwards I could barely wait to unpublish GYPSY BONES. I might not even put it on Kindle. It might not even be titled GYPSY BONES. I'm excited. I'm almost ecstatic (which isn't good because my writing is overly dramatic anyway.)

I guess one needs to take that step that completes a plan. The breakthrough follows the act I've believed finishes the task. Is it ever finished? Or is the end of something an opening to something beyond what could have been envisioned by the former plan?

Yesterday evening John and took a long walk by the bay, hoping to see Mt. Baker floating in the sky. She had flanked herself with clouds. I took a photo anyway. The walk relaxed me. The work I'd done during the day had made the book ready for Kindle publication. I knew I'd do it in the morning. THIS morning. Then we saw the two eagles, just waiting. What a picture they would be. Now I look at it and smile. There is a part of life that moves and another part that is still. Creativity is like that. A circle of waiting, of beginning, of crafting,of finishing, of breaking through, of envisioning the new, of waiting, of beginning, of crafting, of finishing, of breaking through ... 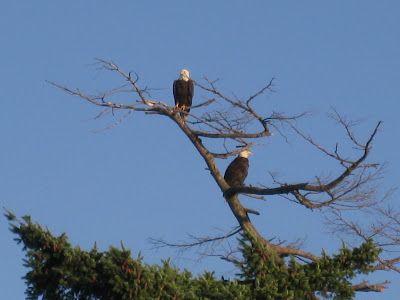