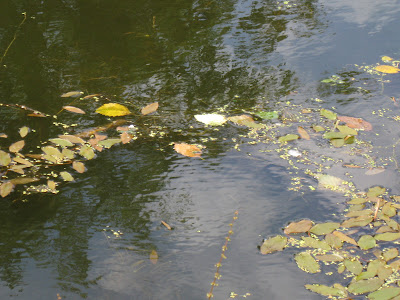 Seven-forty five. Mo licks my face; he's found a sunspot sliding in through the half opened doorway from the office. Late already, I think, with sunlight that clear. My purple, green and aqua blue caftan hangs on the mirror. Now over my head, falling, covering--easy way to dress. I fling the lavender shawl across my shoulders, gather my hair into a clip, and descend the stairs with Mo who is already dancing on his four tiny feet. Sandals. Leash. Mo's into percussion, his front paws playing a cadence on the sliding door. Morning air. Ah…
He runs first to the right, looking for his West Highland Terrier friends, Buster and Shannon, at the house next door to the cottage. Not home? Sleeping? He stands with head cocked for a moment, then turns to take me for my morning walk. Sandals crunch on the gravel. Ducks call to each other, splashing in Beaver Pond. Mo catches the scent of all who've passed by since he last was out. Blackberries have ripened in the thicket along the field, and I pick a few for breakfast. A breeze ruffles the Pacific Cedar.
A nightmare had awakened me during the night. A terrible thing of which I dare not speak in public, it was so violent. But the day to which I later awoke is like a different world. This leads me to think again of all the worlds each of us inhabits, and how they whisper to one another, sometimes in our dreams, sometimes simply as we reach out for a ripe blackberry in a thicket, hoping not to get snagged by a thorn. Did you realize THIS? the whisper says. Do you dare to look at everything you are? There's a quotation from Milarepa, a Tibetan ascetic, which John quoted to me this morning after he told me he already knew about the nightmare because I'd cried out in the night:
"See demons as demons: that is the danger.
Know that they are powerless: that is the way.
Understand them for what they are: that is deliverance.
Recognize them as your father and mother: that is their end.
Realize that they are creations of the mind: they become its glory.
When you know these truths, all is liberation."
Email Post
Labels: evil many worlds nightmare PARADOX REFLECTION

Helen said…
I loved your morning walk image. I walk beside a river early mornings that drowns out the sounds of town. I can hear the birds, river, leaves in motion. I felt like I was there with you. Your quote of John's words gave me comfort. Thanks for sharing your images and experiences in such vivid the heart filling words.
August 18, 2011 at 9:51 AM