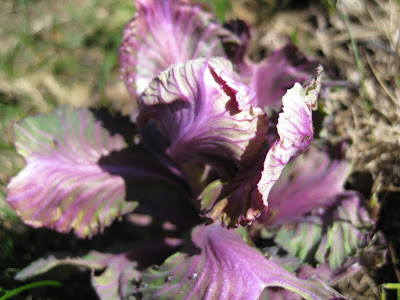 There's sunshine on Sunshine Hill, and look what's growing in our -- "garden?" During the winter I made some vegetable soup into which, among other goodies, I put red cabbage. About a third of the head hid out for months in the bottom of the fridge. In the meantime John read Masanobu Fukuoka's THE ONE-STRAW REVOLUTION about a style of gardening that reminded me of jungles. All sorts of plants tangled together and grew in untilled ground. I liked the chaos of the idea. We weren't sure it would work here on this mountain-rock-hill, but weeds grow, so why not?
We started hanging out at seed stores, looking at packets of herbs and veggies. This we realized was pure play. We bought four fruit trees and started a little orchard of pears, apples, plums, and apricots. Fukuoka says spread compost over the area, so John raided my many years worth of mowed grass piles. There's a circle of poorly kept lawn in the center of the circle drive in front of the house. Down went the compost.
"Let's cut up those potatoes that sprouted and plant them," he suggested in late February. A few days later we opened a packet of pea seeds, sowed them along the south edge of the compost, and dropped several radish seeds here and there in exposed soil. Before we left for California I cleaned the fridge and was about to throw out the rather dry cabbage when I noticed that it was raised up a little in the center, so I took it out to John who was -- where else? -- in the Fukuoka garden.
"Do you think this would grow?" I held it out to him. No harm in trying.
I don't know if we'll actually get a red cabbage, but we have some pretty leaves. AND we finally also have some potato plants! 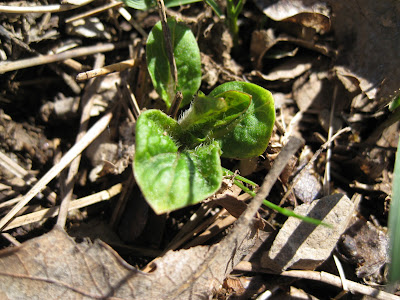 The peas are coming up also -- and John got the creative idea of providing old manzanita branches for their climbing. 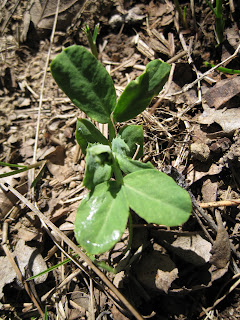 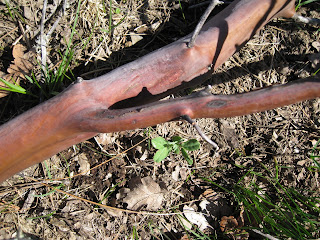 A friend who has a "real" garden suggested he bring his rototiller to break up the soil for us, but would Fukuoka have done that? Never! Besides, we want to see what we hope will be a marvel of many colored leaves and vegetables growing alongside thistles, and maybe some marigolds. I just got that idea this minute. Maybe the deer will eat the whole thing, but that's OK too. Though I'd really like to gather some peas to eat straight out of the shell.

It comes to me that Fukuoka's garden is a lot like a writer's brain; its activity reflects the creative process. I almost always begin in chaos, a mess of thoughts and images mingled, with little focus. Some stillness must settle in, a spiritual, emotional winter. I wander the house, the yard, the woods--picking up this and that, staring at the bits of life poking out through brittle leaves, breathing in the air on any particular day and catching the scent of the season. Sometimes rain falls on my face. Sometimes dawn floods the sky with color impossible to describe. I plant these things. Or maybe I don't plant them at all, but they get planted by the very nature of Being Itself. I have a hard time saying it is God, but the secret I harbor is that this is exactly what is going on. And then one day a word springs up from the brain's tangle and the heart's loam. It's a word I can't stop hearing. I can't stop listening for it to repeat itself, to expand into many words, to contain some nourishment, some beauty and a whole lot of wonder.

I had a singing teacher in California whose yard was a Fukuoka garden of flowers. It sang. Really, it did! Driving by you'd think it was an empty lot because of the overgrowth, but then you saw that all of it was flowers. Every color and variety of flower that will grow in California--and that is multitudinous! Her whole yard was a mess of color in the grass. She couldn't cut the grass, of course, without disturbing the flowers, and so the grass thrived green among the yellow and rose and purple and blue and white and red. Oh MY! I'd catch my breath walking on her drive under the tree that grew white roses. How could such a tree exist? Real roses such as one might find at a florist's shop, but on a tree whose branches spread as wide as an ancient apple tree. I'd hear the singing from the house, her student who preceded me each week. How could I not believe that flower and song flourished together? Oh how I wanted a lawn like hers.

What all of this means, I'm not sure I know. This I do know: Something beautiful is growing again that will nourish the body and the soul. Buds have appeared on the pear tree. 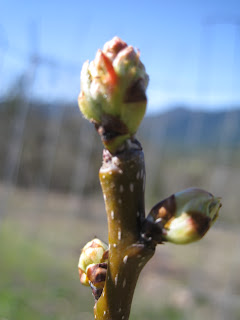 And in the back yard the Shooting Star wildflowers have started to appear. 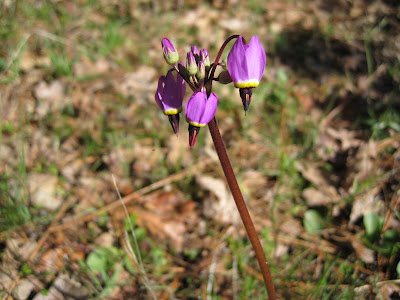 Come then, my beloved,
my lovely one, come.
For see, winter is past,
the rains are over and gone.
Flowers are appearing on the earth.
The season of glad songs has come.
Song of Songs﻿
﻿
Email Post

Helen said…
Christin,
The timing of this wonderful vivid story was perfect for me. I don't even have to close my eyes to picture the colors against the backdrop of blue sky, sunshine and mts.
I haven't been a gardener, but the Daddy of our grand-daughter, Ruby, passed away a couple years ago. He kept a "fun" flower garden and Ruby delighted in it. I thought I must carry this on with her. Ever since she was 2, she is 9 now, she would get the scissors and cut flowers as a gift to departing guests. I worked hard at it the first summer, the second summer it got out of hand.
Now your story about a Fukuoka Garden gives me renewed inspiration to let Tim and Ruby's garden be what it becomes, without my trying to make it "picture perfect". I look forward to what may come to be.
I am not a writer, but maybe like the writer in you, I too can be still in this "everything" garden and bring together a story that is waiting to be told.
Thank you again, for the perfect timing of "A Fukuoka Garden".
March 31, 2011 at 5:24 PM