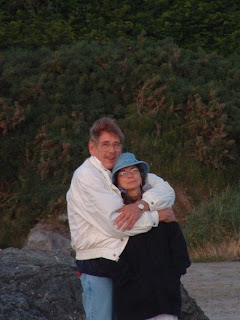 A huge Tom-Turkey in full display stood with his harem by the roadside yesterday when I was driving to Thanksgiving Mass. “Look Mo,” I said to the tiny dog curled on my lap (he fits nicely under the steering wheel and sleeps the whole way), “that fellow knows he escaped being on somebody’s table!” I was still chuckling when I arrived at Shepherd of the Valley. The drive takes about forty minutes and is beautiful as it winds through mountains, woods, and valley ranches and orchards. Fog blanketed the Rogue Valley.

At mass two little girls dressed in their holiday best held baskets of apples. After Father Mike gave the final blessing he asked them what they planned to do with their apples. The older girl stepped forward and replied, “We plan to share them with people.” They walked around among us as we mingled on the way out of the building, and the older girl did give apples away. The littler girl held an apple up to an elder-woman in front of me, but when the woman took it and said thank you, the little girl began to cry. “Oh dear,” The woman exclaimed, and handed the apple back to her. The child’s father tried to apologize, but the woman just shook her head as though what happened was the commonest and most natural and endearing thing in the world.

How often, I wonder this morning, have I given something I loved only to mourn for it when it is gone? It does happen more with children, I think, because they have yet to learn the way that giving works. It’s a circle. The gift transforms as it goes around the circle and doesn’t come back to us from the person to whom it is given. For days, months, years, the giving travels from this person to that (somewhat the way people forward email containing a kind wish), until finally in a moment of need some other person entirely will offer us the fulfilled gift, the transformation of the one we gave away.

A “thanks-giving” becomes, according to this experience, the act of giving away from the reservoir of gifts received in hope of fulfillment someday, in someone, somehow that we cannot now envision. Because ultimately the gift is not a material thing; it is an act of love that must be kept moving, developing, expanding, GIVEN, or it will die.

The night before Thanksgiving Sammie closed up the local St. Vincent de Paul center after her volunteer time was over. It was late. She had more work to do than usual. (She might be embarrassed that I’m telling you this -- but good things need sharing. She‘s not going to tell you, and just to make it universal let me say that it could have happened to any of us) Next to St. Vinnie’s is the large food shelf building. A woman holding her baby stood in front of the now locked door. Something (love?) drew Sam to talk with her. The young woman had walked there from somewhere hoping to arrive before closing. Sam said it would be open the next day. And then, looking from the deepest part of her heart, sensing something, Sam asked, “Do you have anything to eat tonight?” And the young mother shook her head. It was like a bolt of lightning running through our Sammie. She knew immediately what to do. She reached into her purse, into the cash section, and gave it all.

There’s an old Catholic prayer written by St. Ignatius of Loyola that is a perfect example of thanks-giving, the ultimate thanks-giving to God who gave us being and life and makes all thanks-giving possible. I actually was afraid to pray these words as a child, because like the little girl at Mass yesterday, I feared I might not get my apple back and who knows when I might be hungry? But throughout life I’ve been taught that there’s no need for concern. The gift flows throughout the world in the form of truly Amazing Grace. We breathe it. We drink it in. We live by it. We give it. There’s no end to it; and like the young mother on the street, at the very moment of our need, we will be met by a messenger of God who, amazed at the abundance of gifts she has received, holds out her hands to us and gives it all.

Receive, O Lord, all my liberty. Take my memory, my understanding, and my entire will. Whatsoever I have or possess Thou hast bestowed upon me; I give it all back to Thee and surrender it wholly to be governed by Thy Will. Give me love for Thee alone along with Thy grace, and I am rich enough and ask for nothing more.

Unknown said…
Wonderful, as always. Thinking of you often. . .writing seldom. The last month has been a terrible drain on my energies. . .but God is good all the time. . .all the time, God is good. I left everything in His hands (at least as far as I am able in my own weakness); and He answered so graciously and generously, in spite of my imperfect surrender.

Helen said…
Such a lovely reminder, to give all, it comes back. Our Tim, (son-in-law who died a year ago) gave all to everyone unconditionally, his time, gifts of talents of services, gifts of his magnificent pottery art etc. He never seemed to run out of "self" to give. We learned from him. He gifted us with seeing the light in each person and giving it back to them to see. No wonder we miss him so terribly. Thank you Christin. I think your writings are my healing gifts.
November 29, 2009 at 3:38 PM

Christin Lore Weber said…
Thank you, Marilyn and Helen for taking the time to comment. When I read your words, my heart reaches out to you. We walk together in this journey, receiving healing and wholeness in the faith that grows through our companionship. Blessings to both of you.
December 1, 2009 at 7:56 AM