Flower in the Snow 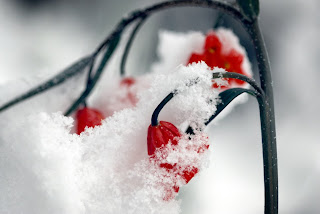 This is the day, sixty-nine years ago, of the great Armistice Day Snowstorm. Or maybe it was the day it stopped after dumping snow all over the Midwest. That’s more likely, because the story Mama told was “You were born during the great Armistice Day Snowstorm.” She and I were in St. Joseph’s Hospital in Sioux City. Aunt Alice Lou tried to get there with her four-year-old, Sandra Su. The snow, a white-out, stopped them somewhere in Iowa, and they were taken in by strangers, a farm family who fed them, gave them a bed, and treated them as special guests until the plows came through and they could drive the rest of the way to Sioux City.

Perhaps I’m remembering this because our Oregon sky this morning has that flat look I recognize as a presage to snow, though it won’t snow here because, in the low 50’s, it remains too warm. In fact, rain has teased the autumn earth to bring forth winter grasses and the tiniest green plants that at this stage of growth resemble flowers.

Who ever thought November might be a time of birth? Ah well, all of it is paradox. I glance up at my icon of the Christ--one side of his face calm, clear, and divine; the other side shadowed, emotional, and scarred with humanity. The most impossible bits of being do collide, don’t they. Snow--I smile. Snow when I was born. Snow when I married John outside, by the lake, in March, in a blizzard! Snow the day he died. Snow that anyone might think is the bringer of death, in all these times became a glorious celebration of new life.

I’ll find the picture Krista took that April day he died, image of yet another conjunction of opposites. The hope, the beauty, the promise of a wild flower in the snow.