When a Lifelong Friend Dies 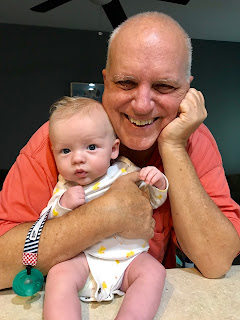 Bill and his grandson, Jad
In half-dream last night I saw him in sunlight as an eagle and I must have been the hawk riding the thermals above  the Applegate hills. Wind ruffled our feathers and seemed to blow right through us as we circled. Those cries are all the words, I thought, hearing the birds' cries echoing off the ridges of the Buncom Bowl. It was the sound that bound us. Our feathered wings never touched.
It is a rare privilege to have had a friend like Bill Cunningham. He died this week--January 12th. I knew he'd fly soon, but one never really experiences death of a loved one until it happens. For half our lives we had lived a continent apart and saw each other only once, a few years ago when he made the trip west. But all that time, writers that we both were, Bill and I shared our souls in words.
I met Bill in the early 1970s just after I had left the convent and he was one of the priests at the University of Minnesota Newman Center. He resembled a Hoffman Jesus and delivered homilies that urged the congregation to respond. Who could not notice him? Already he was in the forefront of a new and progressive Catholic Christianity--maybe he already was past that, though it still held him in its grasp. When he invited discussion, I loved the challenge and would take him on. It was so stunning--the way he stopped to reflect on everyone's insight or question. He spoke from his sense of compassion, not from some cast-in-stone dogma. He was a Dominican Friar of the Order of Preachers--those who back in the day were in charge of the Inquisition. He, already then, detested (not too strong a word, I think) that historical connection.
He and I sat on my porch in St. Paul one summer day in the mid-1970s. He was right on the verge of leaving the priesthood and the Dominicans. He'd come to talk it over with my now deceased spouse, Pat Kelly, who had also left the active priesthood, and with me--recently dispensed from convent vows. Bill was deeply in love with Liliana, and his edgy relationship with the Church was beginning to feel impossible to maintain. The angst of finalizing the decision that would affect his remaining life, though, showed itself in his face and posture. He quoted passages from the then popular novel, The Thornbirds. What did it mean to be faithful? The whole struggle felt like such a paradox.
He married Lili. 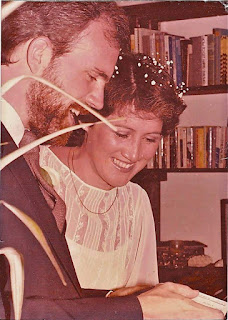 If I were writing a book, Part Two would begin the day Bill came from Florida in 1985 to spend the afternoon with Pat and me the day before Pat had cancer surgery from which he never recovered. We didn't know that, of course, the afternoon we sat together in my living room listening to Symphony #7  by Ralph Vaughn Williams, with the poetry of Walt Whitman. I still see him in memory--eyes closed, focused, silent, aware, compassionate, as though he saw all our lives in this one moment.
I do not regret this journey.
We took risks, we knew we took them,
Things have come out against us,
Therefore we have no cause for complaint.
-Walt Whitman
We didn't see each other again for thirty years. In the meantime, though, our friendship developed a character of presence. I had moved to California and remarried.  Bill and Lili and their girls lived a creative and socially involved life in Florida. But we phoned. When email became available we did that. Mostly we lived in each others' souls. I was writing my books, now seventeen of them. Bill read every one and commented on all but the last. As our patterns of belief evolved we shared our newest realizations with each other, always reaching deeper and deeper for wisdom. He became more earthy--"I'm a pagan," he insisted--while I drifted further and further into the mystical. Both of us began writing poetry. He would email from airports across the country while he worked as a management consultant. We shared ideas, beliefs, poetry, books we were reading, personal struggles and joys, hopes, dreams. He called himself Pilgrim-Seeker. He called me Dreamer-Weaver. We seemed to share one time and space while also being a continent apart.
Last night in my grief over his death it came to me that very little had changed. As the poet, Yeats, had written, I loved the pilgrim soul in him. Except for the written words we shared for so many years, that soul of his remained. His presence lingers in all my books as well. His last poem written for me holds the paradox:
Failure of Language
The role of the artist is
to make you realize
the doom and glory
of knowing who
you are and what you are.
--James Baldwin
We once wrote each other often,
to tell the intimate tales of our lives,
rich in language, intricate in detail, full
of ideas and hope.
Then gradually, we stopped,
not for lack of caring, of that I'm sure,
but perhaps because we had drained out
of language all we could. Then the sudden
harshness in our lives, raw and open,
the painful death of our spouses,
left us stunned and speechless,
standing on a strange shore,
looking out onto a vast sea
where there were no islands,
no sails, no other shore
that we could see.
Perhaps we had given all we could to one another
and now had to face realities where language,
our common gift, once our great solace,
could not help.
-September 4, 2020
Words have done as he said. Words are fragile and eventually cannot hold reality. We ourselves eventually feel more attuned to the wordless winds We set out then, finally comfortable with the silence of our heart's depths, onto the seas of which Whitman and Williams wrote, and Bill, Pat and I contemplated all those years ago. To Bill I now say, set forth and fare thee well. I bear witness to the magnificence of your life, your soul, my dear friend.
Sail forth--steer for the deep waters only,
Reckless O soul, exploring, I with thee, and thou with me,
For we are bound where mariner has not yet dared to go,
And we will risk the ship, ourselves and all.
O brave soul!
O farther farther sail!
O daring joy, but safe! are they not all the seas of God?
O farther, farther, farther sail.
Whitman's "Passage to India."
Email Post
Labels: Death friendship gratitude Soul Friends The Writing Life

Unknown said…
Wishing you peace. The loss of a close friend brings such a range of emotions. I am grateful for his presence in your life, for surely you are better for it.
January 15, 2021 at 5:03 PM

Susanna Taddei said…
Thank you for sharing this piece. Loved Bill dearly, and it helps to read about how important his friendship was for so many other people.