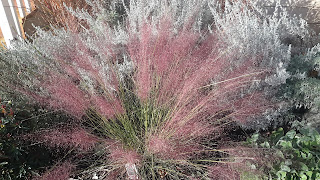 Today I spent a bit of time trimming the lavender way down. Tomorrow I'll get to the grasses. The pink lost its color with the snows of January, and new shoots already are appearing at the base. It felt like springtime down below the porch.

When I came in I began rummaging around in my Word files which are about as messy as files can get with partially done manuscripts, titled first one thing, then another. I opened one called "A Delicate Balance," which I thought would be the unfinished novel once called "Small Hands," but it was just a snippet. I found it intriguing. Maybe I need to go back and work on this, I thought, as I changed a word here and there and eliminated a sentence that made the entire paragraph sentimental. Just another kind of trimming. Spring cleaning. (I don't do that so well either ;)

Here's the snippet. Are you at all intrigued?

Eva called Lewis late while the rates were low. His voice saying hello made a warm spot for burrowing. Where are you right now? She wanted to know, to be there with him, to sit on his old bean bag chair, to hold a glass of wine, to talk by candlelight. There was no phone in the attic at Mama’s, so she had to talk low. No one should hear the things she wanted to say to Lewis. He was her confessor. She sat in her mother’s kitchen where the phone hung on the wall.
Are you sitting on the sofa? She asked Lewis. Do you have candles lit?
Lewis’s light would flicker, casting first this plane then that one into shadow. She sought the plane of kindness.
“What can I do?” She asked him, not knowing if she meant her mother’s one lie or the extension of that lie through all the years. One adjustment in the tone-poem of being and the whole composition could be lost—or could become a masterpiece.
“I’ll send you some new reeds for your oboe d’amore,” he said. “You can practice while your mother is painting. It will do you good.”
“Lewis?”
“I’m here.”
“Lewis,” the words choked her. “When she dies…” She stopped. She had said it, but didn’t know if she could go on or if her voice simply would fade into the kind of silence she’d experienced as a child.
“Imagine the music, the progression of tones in your mind, Eva.” Lewis said in a steady voice.
She did as he said and imagined the music, the interval of yearning that had found its home.
“When she dies,” she asked again, “how will I survive it if all my life we’ve both been someone other than what I thought?
What if we both disappear, she was thinking but didn’t say aloud, and the world goes on as though we’d never been?
“You’ll always be Eva.” Lewis said in that low, calm voice. “And if you forget, I’ll be here to help you remember what that means.”

Bill Pilgrim Searcher said…
Yes, I am totally intrigues (and thanks for the easier to read font colors!).