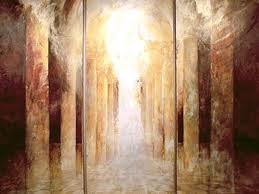 Since I read Jane Hirshfield's WOMEN IN PRAISE OF THE SACRED about fifteen years ago, I've been  taken with the mystical thoughts of Marguerite Porete. She has a fascinatingly descriptive word for God or Ultimate Reality: The FarNear. She writes of the "Ravishing FarNear":

In which one cannot long remain.

I bought and studied her book, THE MIRROR OF SIMPLE SOULS, for which she died a martyr's death in Paris, 1310 CE. Recently the poet, Anne Carson, has written of the relationship in thought between Porete, Sappho, and Simone Weil. Also, Joanne Maguire Robinson contributed a scholarly work titled: NOBILITY AND ANNIHILATION IN MARGUERITE PORETE'S "MIRROR OF SIMPLE SOULS."

FarNear has come to represent for me the reconciliation of opposites -- that ultimate paradox of life here on earth which is the threshold to Complete Union/Allness/God-beyond-all-conceivable-gods.

Are the divisions in our lives illusory? Not "either/or" but rather "both/and." Is it at the point of aperture that we go through into unity? How are we both individual and One with All? If this in not either/or; if this is both/and; a FarNear reality that we realize only in moments like sparks, the click of a lens, then . . .  Then?

Some years ago I realized that my obsession with Marguerite Porete's imagery and thought and experience placed me in a lineage with her. She is one of my spiritual mothers. At that time I began to write a novel titled THE FARNEAR JOURNALS, about a community of contemplative/mystical women in a monastery on the shores of Lake Superior in Minnesota. Now that I've published GYPSY BONES to Kindle and as a paperback on Createspace and Amazon.com, I'm rewriting the JOURNALS. My hope is to go deeper into her thought, to find ways to express it through the novel's characters at the same time as I incorporate her vision into the depths of my own soul.
Email Post