For the past month I've been away from Sunshine Hill to be with my sister, Liz, during a time of need. Moments for writing here are few, but this morning I realized that finding them is not an impossible task. Already I am keeping a Caring Bridge blog on which to notify Liz's friends, family and co workers. Liz's Caring Bridge My own deepest feelings, though, don't belong there. So I'm returning here, because there is a whole dimension of this journey that I need to write about in a different space: in THIS space.

John and I both are here now. He drove east from Oregon last weekend, arriving on Tuesday around noon. His presence helps bring me more stability. All terminal illness exacts a toll on all who are connected to it by suffering and/or by love. Liz has been battling since 2003, and since she received radiation to some brain tumors in the form of Gamma Knife surgery last year, a condition called radiation necrosis began to develop. Now her balance is affected, she can't walk, she finds thoughts difficult to form into sentences, and she is caught up on a powerful fatigue. At the same time she has developed some characteristics described by Kathleen Singh in her book, THE GRACE IN DEATH. She is radiant and calm--beautiful to look upon. I love being in her presence. She is peaceful, patient, welcoming when she's awake, accepting of help, gracious, compassionate with the weaknesses and mistakes of others.

I cannot imagine my little sister dying. She may well be dying, but I still can't imagine it. Maybe just another hour of sleep and she'll wake up her old self. I've watched two husbands, two friends, my mother and father die -- and there's no controlling it when it comes. Still it seems there's a magical little switch in the human heart that makes us think we just maybe can be in control, or God can be in control, or the doctors or some medication or SOMETHING. But eventually we run out of options on this plane of being. And honestly, truthfully, Liz's illness is the hardest I've known. Her passage out of this world is incomprehensible to me.

The actions are prayers in themselves. This is what I whisper to my mind--reminding, over and over. Rubbing her feet with lotion. Refreshing her drinking water. Cutting her nails and her hair. Covering her when she feels cold. And the intimate things: unmentionable.

Did you know that the nerves for dancing come from a different place in the brain than the nerves for walking or simply moving our feet. Steve discovered this when attempting to move Liz from the big chair to the transport chair. At first we worked together as he held her and I moved her feet with my hands. Then it struck him: "Shall we dance?" And she could. Oh it's clumsy, yes, but it works. She can create the rhythm in her mind and move with it, turning, turning...coming round right. And down into the chair.

Outside Minnesota rains. Every green leaf remains without blemish in its newness. There's a soft breeze. Life exists momentarily. It always exists that way. 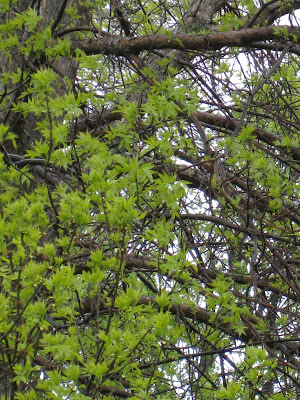