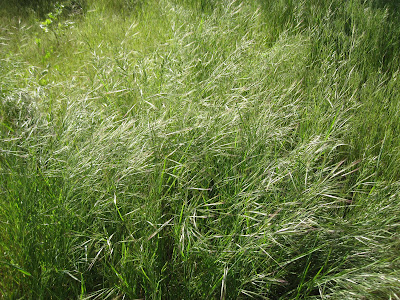 Of John's former tasks here at Sunshine Hill, mowing the lawn is the one I've most liked. More rain has fallen this spring than in any since we moved here, and just the other morning, looking at the beautiful, long grasses, I wondered if our drought of even more than the biblical seven years had passed. The rain is something I need to keep track of. On the day Google shows me the sunshine peeking through the clouds and predicts a temperature in the mid to upper seventies, I know that by late morning the grass will be dry enough to mow. This means I don't take a shower, but go directly from my long nightgown, that is wet with dew all around the bottom from my morning walk through the long grass with Mo, to jeans and a denim shirt. I eat breakfast and write for a while, and then put John's Valley View Winery denim cap on my head, slip my work gloves on my hands, fill the gas tank of the mower and start 'er up.

You know, I think as I make my turns around the acre of lawn, this mower is working pretty well since Ken tuned it up last summer and then I bought the new battery this spring. I'll have to thank him again for all the time he put in. Maybe a nice card this time. On cue the mower engine began to lurch—forward-pause-forward-pause. What IS that? It's got gas. Did I kick the tires? (but what would that have to do with the engine?) I didn't kick the tires. I look at them, they look just fine, not coming off the rims like they did that first summer (and the second summer). It's such a hassle for Ken to have to take them off, put that gook in them, and put them back on the rims. "Kick the tires," he tells me every time. Oh well, it's still moving, even if I do feel like I'm learning to drive with a clutch and don't quite have the technique down. Ohhhh, of course! The clutch. I'll bet something happened so it isn't fully in gear.

So I'm thinking about all this as I'm negotiating the little hill on the west side of the house. The first year I didn't dare to mow this hill. Now I've figured out the straight up, straight down technique. Can't do it sideways or you'll kill yourself. I'm congratulating myself now both for figuring out about the clutch AND for this new technique I've developed. Who says I can't do this house and yard all by myself? (Except for occasional visit from Troy who weed-whips a fire-boundary for me—something I have to add for the sake of full disclosure. And Ken, of course…mustn't short-change all Ken does for me.)

Now, I've never had much visual-spatial intelligence—not real aware of where things are in space. When I was a little kid I feared I might walk off the dock into the river just because I seemed a bit uncertain where the edge really was. My head's in the clouds (my feet sometimes too—firmly planted in mid-air, as Mama Cass sang). Anyway---I'm mowing up and down the little hill, thinking, being proud of myself when . . . BANG! I hit a tree. Yep. Going downhill. Mower won't move. I didn't hit it head-on, but sideways—not taking account of the mower-plate or whatever that big round thing is called. Not taking account of the enormous grass catcher tube (what IS that thing?). Who knows the words for machine stuff? Not me! And now it was starting to smell like rubber. TURN IT OFF! says the John-voice in my head.

I do it all in order. At least that. And there it sits, jammed up against the tree. It won't budge. The front wheels are all catawampus. Phooey! It's probably broken. If I could just get it moving, I could straighten out the wheels. Maybe. I try to imagine what John would do. Would he get the Suzuki-Mule over here and use the winch? Maybe. But first he'd put his shoulder to the job. What if I could get it rocking just a little, unhook the grass catcher thingy from the tree and release the mower guard/plate/whatever? If I couldn't get it to move, I'd end up having to call Ken again. Oh Man!

So I pushed. I leaned on that machine with all my strength. I actually got it rocking. And it released! Yay. OH NO! It was rolling the rest of the way down the hill. STOP!! And it did—right against a large bush; head-on this time. I yelled and then laughed. OK, let's see if it will start. I climbed in among the branches onto the seat and turned the key. Nothing. Hum. I looked around at the various components of this – now enemy – machine. Oh. The mower blades were still engaged. I hadn't been able to get them all the way up when they'd been stuck on the trunk of the tree. Fixed that, and the mower started up. I backed away from the bush, then went forward out of the wilder part of the property up to the road and lurched my way back into the yard where I completed what mowing I had left.

I won't be mowing the grass again this week. Guess I'd better call Ken about that clutch.
Email Post

Terri said…
always a learning curve in life...made better with a littel sense of humor...and some really good friends!
June 7, 2010 at 8:09 PM

walk2write said…
I'm glad you didn't get hurt. Machines and I don't get along too well either. It's been a while since I've seen or heard that word--catawampus. It reminds me of a wonderful friend from church when we lived in Illinois. She was one of the most down-to-earth people I've ever known, a simple soul with no pretense. She always said she had a catawampus way of looking at things, and I feel privileged to have known her.
June 15, 2010 at 8:13 PM