REBIRTH OF A BOOK 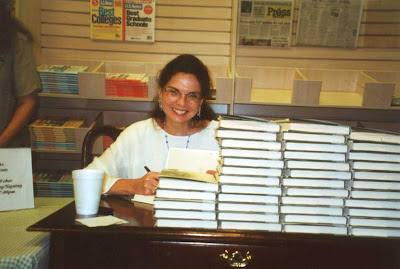 Surprising news came in my mail the other day. Scribner/Simon&Schuster is re-issuing my novel, Altar Music. It came out originally in the year 2000, and thrust me into a flurry of travels, readings and signings I'd never imagined for myself. It was great fun, and I met many amazing people. At that time I felt an almost symbiotic connection to the book itself which had both pleasant and painful consequences. When "my" novel was compared favorably with Ron Hansen's Mariette in Ecstasy I actually felt shimmers inside me. But when THE OREGONIAN reviewer said it was "purple prose," I felt like going back to bed and hiding under the blankets.

After all these years, the novel no longer feels like another part of myself, but rather as a good friend who is getting a chance at a second life. I called Sammie when the letter arrived, and her excitement stimulated, maybe even resurrected something I'd silenced in myself when the publisher took the book out of print and relegated it to the remainders list—then shredded all remaining copies. Now they are bringing it back and all at once I want to celebrate the book's successes:

Now its publisher is recognizing it as one of their notable books, and bringing it back out in its trade paperback edition. It will be once more available for purchase at bookstores and at Amazon.com in both paperback and Kindle editions.

Really, it never occurred to me that such a thing might happen, and on this bright summer morning, it has me smiling.
Email Post

Ciara Brehony said…
Christin, what a delight to meet you! Thanks so much for your sweet comment over on mine. And I love what I see here. Congratulations! I am SO impressed with your list of published books (an ambition of mine!) and I can feel your excitement about the re-issue of your novel.

I look forward to reading more here. And btw I loved your grass-cutting story. Love your style of writing!