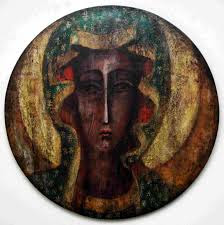 Andrew Harvey's new book, RADICAL PASSION, moves me deeply. Yesterday afternoon I'd stretched out on the couch and clicked on my Kindle to let myself dissolve into his words. He was writing about the Black Madonna and her connections with the earth, with the soul's dark night, with the cloud of unknowing, with the writings of Denys the Areopagyte on the apophatic way, with the manifestation of Kali-Ma in our world and our lives---the weaving and overlapping set my heart racing. Finally he made the connection between personal, individual passion/suffering in the tearing apart of our hearts and souls and the suffering of earth herself--the tearing apart of nature and culture. He was saying that both are one. And my suffering is not only my own suffering. The tearing of my own heart and soul are not only that. Each of us in these chaotic times suffers the pain of the earth that we have tortured and raped, the pain of the economies we have ravaged through greed, the pain of the political system we have corrupted with false power.

Here: listen to him talk about the "Black Madonna" or La Donna Bruciata and our connection with her:

"...what you connect with in the depths of yourself are those 'rays of sublime heartbreak.' What She gives to you is the ability to participate in Her own life of final fiery compassion beyond hope, beyond agenda, beyond all plans, beyond any kind of transcendental justification. This aspect of the Black Madonna is an initiation into the burning furnace of charity, that is, the broken and burned heart of the Mother. You are taken into the depths of the mystery of the Mother because the Mother is not simply the great, dark cloud of final mystery that is uplifting everything from revelation to revelation. She is not simply the Queen of Nature and the Queen of Tantra, the Queen of all the fertile processes that transform life itself into a mirror of the Divine. She is also Herself living as every dying animal, as every dying plant, as every raped child, as every brokenhearted gay man and woman, as every abused person, as every killer, as every being of every kind on the planet suffering all the different forms of torment, ignorance, and grief.

"Knowing her...is a mind-heart, and soul-shattering experience, because if you only know Her in the transcendent aspect, then you can leave this world and reality behind. However, your realization is going to be incomplete. . .However, if you only know Her as final suffering and final compassion, you will not be able to bear such knowledge, because you will not know her also as the Queen of the Processes and the Queen of the Mysteries. You really have to come to a knowledge of Her in all...her aspects and link them all in the inmost part of yourself beyond thought and paradox...."

Well, I can't quote the entire book. But I sort of wish I'd written it.

CAT said…
Ah yes: Maiden - the promise of beginnings, life and transcendence, Mother - creatrix and nurturer, Crone - Mistress of transition, decay, rebirth. Brahma - creator, Vishnu - sustainer, Shiva - destroyer. All three must encompass all that is through cycles of beginning, maturing, destruction and rebirthing. Thank you, Christin. (CAT, taking out Kindle and ordering this book. How wonderful to be able to lay hands, mind and spirit on special things so quickly in this world we live in.)
April 4, 2013 at 8:24 AM