NEW VENTURE IN THE ONGOING ADVENTURE 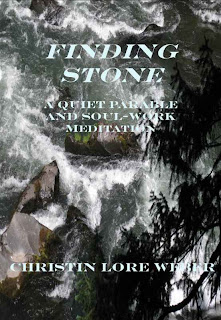 As a writer I sometimes take a liking to some of my books more than to others. If those books don't get a fair shake in the publishing world I ache for them in a motherly sort of way. One of those "abandoned" books was a little meditation book titled FINDING STONE: A QUIET PARABLE AND SOUL-WORK MEDITATION.

Oh, it was published--initially by Lura Jane Geiger, who founded Lura Media Press. It was to have been her final publication before retirement. She really loved the manuscript, particularly the mediation about living life to the full. She called me and read my words to me over the phone:

I do not want merely to live; I want to engage life. I want to squeeze life like a tree-ripened orange, to carry life like a child. I want life to be my love. I want to breathe deeply and fill my lungs with life; let its blood rush to my head and out to my fingertips. I want to spread life around, plant it like seed, give it away as if it had no end, no limit, as if I were rich with it. I want to take life on like a warrior, to shake it, to wrestle, to tear it open to expose its heart. I want to weep with life, to tend its wounds, to run pure oil down deep into life's pain and sing while life heals. I want to be swept up in life's adventure, to go where life calls me, to climb mountains, explore caves. I want to refuse life nothing.

It felt to me as though she'd become a midwife for my work. But before we could bring the book to birth through the publishing process, Lura Jane found it necessary to retire. What a loss. But her top editor bought the company which became Innisfree Press. Her name was Marcia Broucek. Her design for the book thrilled me, and she published it to good reviews. It can be difficult, though, when a company changes hands right during publication of a work. The book can become a sort of stepchild after a short time. Besides that possibility is also the possibility that a small new company won't make it through the first few years. And, sadly, this happened to Innisfree Press.

A few copies of FINDING STONE remained in my closet, and I brought one out from time to time, sent it here and there to various publishers. But it had been published already, and had sold only a few thousand copies -- no matter that a few thousand were all that ever existed of the book, numbers count in this business.

After John and I found one another and joined our writing and publishing efforts in his long established but little used CYBERSCRIBE PUBLICATIONS, we began to explore the potential of E-publications on platforms such as Kindle, Nook, Sony, iPad, and others. As a result, both of us are launching several of our books for sale in that format. The first book I've launched is FINDING STONE. He's far ahead of me, with four of his already launched and a fifth in process. In defense of my slow pace: I need to enter/type most of my out-of-print books onto the computer before I can convert them to the appropriate format. I was still using WordPerfect and floppy disks when I wrote them. No longer do I have readable electronic copies. But the new manuscripts--those I have. Five novels and at least three memoirs. What if I decide to just skip the regular publisher and publish directly to the electronic platforms? Already Amazon.com is selling more Kindle books than traditional ones. Even while writing this thought, I know that I intend to send my memoir, DARK FLIGHT, to Ave Maria Press in hopes that they will want to publish it in the more traditional way. And even while writing THAT thought, I know that I'll attempt to keep the E-publishing rights in order to launch it in that format simultaneously with a trade-paperback edition.

Look us up! You'll find all my available books at Amazon.com. CIRCLE OF MYSTERIES (book and CD) and ALTAR MUSIC can still be purchased in trade paperback. Some of them are on the second-hand market. FINDING STONE and ALTAR MUSIC are both available on Kindle. Just search my name: Christin Lore Weber.

John's there also. John R. Sack (There's another John Sack and their books get mixed together sometimes. The other one was a Journalist.) Several of 'our' John's books remain available in paperback or hard cover. All soon will be available electronically as well. FRANCISCAN CONSPIRACY; ANGEL'S PASSAGE; WOLF IN WINTER; YEARNING FOR THE FATHER; and a short story: "Blood-Brother Bear."
Email Post
Labels: an author's dilemma Cyberscribe Publications e-publications Kindle books publishing self-publishing

Stratoz said…
had to smile at the name for I went to school with a Jane Geiger, who I recently saw for the first time since I graduated in 1981. Best wishes on this project.
April 20, 2011 at 3:55 AM