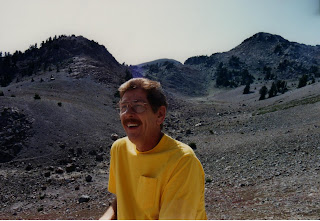 This year I won’t be baking a German Chocolate cake. Over my years with John I mastered the difficult recipe because he loved it. My guess is that it is a richer cake than almost any other, so I produced only one a year on his birthday--today: January 6th. He would have been 70 years old. “Make a double batch of frosting,” he’d torment me from the living room, “and add some extra pecans.” I’m chuckling over that right now. He’s a constant presence here on Sunshine Hill. This morning I called out “Happy Birthday, John!” the minute my eyes opened. It’s what I always did. Why stop now?

While he was alive I wrote about him quite a lot--poor guy. He actually was a private man. Ordinarily he offered only the information someone asked for, and no more. It isn’t easy being married to a writer. “You aren’t going to tell people THAT?” he’d comment, and get answered with “Why not?” And then: “Well, what if I say it THIS way?” and he’d concede. Probably he preferred my fiction--references to him in fiction are not straight on and end up being a simple matter of a reader’s conjecture.

My plan was to write about him today for his birthday. But maybe, thinking about how private he always was, I’ll do something a little different. I’ll just talk to him a bit and you can conjecture what you will.

-The gophers have gotten worse, John, just as you said they would. The hill in front is peppered with their mounds and I’m wondering when the whole hill will collapse inward, just as you said it might. The mounds are coming closer to the house. The cats are gone. Is poison the answer?

-The Mule is sputtering. Both Cliff and Ken said there’s probably water in the gas. The tailgate is rusting after the damage I did when I didn’t use the parking brake and it hit a tree.

-There’s a bulldozer on the ridge behind the house--I’m thinking that someone else is building, digging the foundation, since I don’t hear trees crashing to the ground.

-I still miss the sound of your breathing and your heartbeat when I laid my head against your chest.

-Maybe I’ll play that tape of you controlling airplanes.

-Try visiting me in a dream.

-I’ve put a picture of you in every room.

family fan said…
I met your brother in law at Christmas, his daughter is my sister in laws partner if you follow that. That had many of your books. I found two used copies of the parable, not here so can't remember the name as titles don't stick with me like content. Going to send one to Mary who got excommunicated and is now an ordained Priest, Catholic, I know she will appreciate, My work is taking people outdoors, my whole life has been that way. I loved your parable book, plan to read it here in the woods, in this snowy beautiful hill and gully I live on. Anyway, all that is background. I appreciate your writing and sharing the loneliness and the beauty of each day.
January 7, 2010 at 1:43 PM