New Novel on the Way 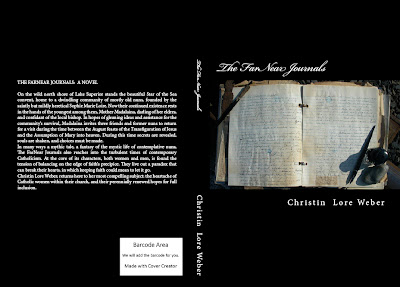 I'm enormously excited! After years of tinkering and re-writing and just waiting around to see if my mind might change, I've almost completed the publishing process for my novel, The FarNear Journals. In twenty-four hours I will receive an email from the publisher I now use (CreateSpace of Amazon.com) informing me whether or not my formatting qualifies. Then they will send me a proof. And if it is acceptable to me, it will be ready for sale as both a paperback and ebook.

This project began when I still lived on Discovery Bay in Washington State. I bought a book titled, Women in Praise of the Sacred." In it was a prayer written by a French woman martyr, Marguerite Porete. She was burned in the center of Paris in 1310 for her words, considered heretical by the Inquisition. Interestingly, copies of her book, Mirror of Simple Souls, survived, and for many years was circulated in France and Europe as the work of an anonymous author--and as such it was acceptable. How ironic!

About this time Paulist Press came out with Ellen Babinsky's translation of Porete's work. By now I've read it again and again. I was entranced especially by her reference to the experience of God in our lives as "The Farnear." The word perfectly articulated my own paradoxical/panentheistic spiritual leanings. It also felt like an iconic word for my mysterious lifelong connection with monastic life. In short: I yearned for it, gave my life within it, felt suffocated by it, left it, dreamed about it almost every night, and continue to yearn for it but not to find it in reality. If that doesn't make a whole lot of sense to you, don't worry, it doesn't make sense to me either. So I wrote a novel.

Here's what I say on the back cover:


On the wild north shore of Lake Superior stands the beautiful Star of the Sea convent, home to a dwindling community of mostly old nuns, founded by the saintly but mildly heretical Sophie Marie Loire. Now their continued existence rests in the hands of the youngest among them, Mother Madalaina, darling of her elders, and confident of the local bishop. In hopes of gleaning ideas and assistance for the community’s survival, Madalaina invites three friends and former nuns to return for a visit during the time between the August feasts of the Transfiguration of Jesus and the Assumption of Mary into heaven. During this time secrets are revealed, souls are shaken, and choices must be made.

In many ways a mythic tale, a fantasy of the mystic life of contemplative nuns, The FarNear Journals also reaches into the turbulent times of contemporary Catholicism. At the core of its characters, both women and men, is found the tension of balancing on the edge of faith’s precipice. They live out a paradox that can break their hearts, in which keeping faith could mean to let it go.

Christin Lore Weber, returns here to her most compelling subject: the heartache of Catholic women within their church, and their perennially renewed hopes for full inclusion.
Email Post

Christin Lore Weber said…
Hi Stratoz....I'm just getting around to marketing! Our granddaughter was born right after the book came out. Two births--baby and book. Book came second.
August 23, 2013 at 4:53 PM

Anonymous said…
I LOVED Altar Music and now have started Far Near Journals. You are just a wonderful writer......I am Catholic and a woman and worked for the Church for 27 years. Very interesting that all you say bares some truth.....thanks for sharing your gifts with us.
January 25, 2014 at 1:16 PM

Christin Lore Weber said…
Thanks for your words -- wish I knew your name. Those of us who gave such a large portion of our lives to the Catholic Church have a special bond.
January 26, 2014 at 8:53 AM