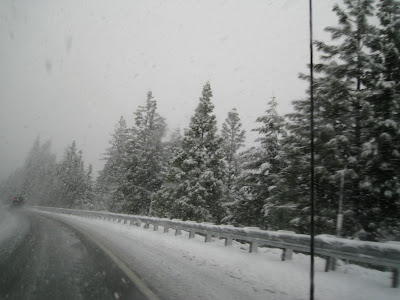 The road started to get a little iffy just south of Dunsmuir on the way towards Mt. Shasta. We had the plastic bag of chains, never yet opened, from the Les Schwab dealer who (I remember this distinctly) said they were a no-brainer to put on. But the Ford 500 is an all-wheel drive, so we were still OK. Probably we'd make it all the way to the mountain and the other side would be clear. It's the way fiction writers think.﻿ 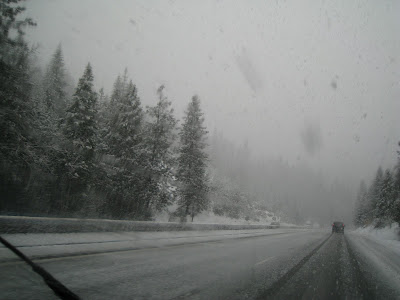 OK, so the flakes ARE as big as silver dollars. For a born and bred woman from Minnesota and man from Ohio, this should not be a problem. We should have kept going. Just look, we are nearly at the head of the line. But then, after this picture, the snow got worse. The traffic really did narrow to one lane. Was it ten thousand semi-trucks that lined the Interstate? All of them parked, all of the drivers out in the snow fixing chains to their tires? Where were those guys who come out on days like this and collect fifteen dollars a tire for putting chains on the cars of septuagenarians? (not to mention, again, arty types who've spent their lives in their imaginations.) 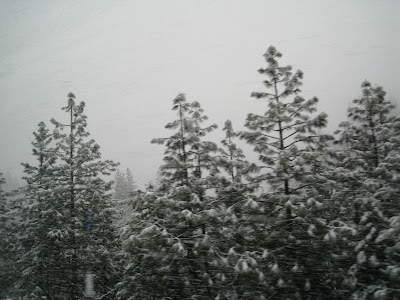 The blinking yellow sign announced CHAINS REQUIRED FROM THIS POINT. We ought NOT to have stopped! There are those moments in life when such directions need to be ignored. We stopped. Out came the Les Schwab chains. Good man! He put a laminated sheet of directions inside next to the chains. John laid it on top of the car and began to read--good academics that we are! Unhook the chains. But where's the hook? It wasn't an actual hook. This can fool a person. Why didn't Les think of that? Pass the yellow of the yellow and blue plastic covered ring behind the wheel and hook it. Now the laminated directions are full of the dollar sized flakes. John brushes it off. A giant flake lands on my glasses. I can't see. This snow is wet--not nice freezing dry Minnesota snow. My gloves are wet all the way through. My jeans are sopping. My jacket is already wet clear through. It's a Land's End Squall Jacket! Wouldn't you think one of those would keep out the water? I'm pulling at the chain. It's supposed to fit around the tire, isn't it? There's no chain on the bottom of the wheel, but then you aren't supposed to have to move the car to complete the process. Pass the black hook through both of the red rings and hook to the chain. But the black hook doesn't reach through both red rings. The chain slips. John's on the driver's side having similar problems with the other wheel. A semi throws up slush and stones under his jacket. He's wearing sweat pants. They are now ready to be wrung out.
I announce that this is insane and that we should unhook the chains and take our chances. If the CHP is out in the storm and stops us, let them put the chains on. We tried. I pull the chains off my wheel. John's are stuck. He backs up the car a tad. I pull at the chains. Oh NO! They've wrapped around the axle or something back there. I tug. I'm splashed by another semi. They come loose. I throw them into the trunk.
Just as I'm getting into the car so we can pull out and get into the line of other cars and trucks, two semi's pin us in--one beside us, the other angled across the front of us. I visualize spending the night there. I wring the water out of my gloves onto the floor of the car. I squish the extra water from the denim covering the tops of my legs and my knees. Oh well. There's trail mix in the back seat and a blanket in the trunk. John now comments, "My unders are full of slush." He's good at assonance.
Then we sit for two hours before we start moving again. About four miles ahead we see the cause of the gridlock. The Department of Transportation had reduced the roadway from three lanes to one, just to accommodate three men in lime green vests jawing idly beside their sign offering to remove chains.
The next day I told capable Ken the story of the chains. He laughed: "You're supposed to practice in your driveway before you leave." 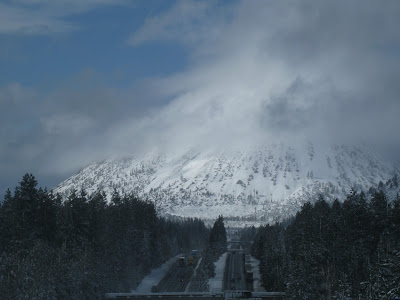 By the time we reached Black Butte the road was clear.
﻿

Helen said…
I'm sorry, I realize this could have been a very dangerous situation for you, but I did have a great laugh picturing this whole episode unfolding. I love your stories and how I can relate to them so well, having lived through the MN winters, traveling with three little ones in blizzards (stupid), traveling through a Mt. pass in UT, only making it through the storm because a big truck and trailer cleared a path for us etc. Oh how I enjoy your ability to make these images so vivid with words. What a marvelous gift you have and I thank you for sharing with us.
March 28, 2011 at 8:06 PM

I'm always so grateful for your comments on my little stories and reflections. It pleases me that you laughed. I hoped to evoke laughter.