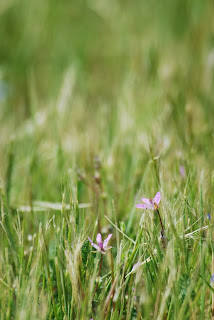 When I was a kid, Bonnie Smith could play "April Showers" on the piano. I liked to sing it in a falsetto, mimicking Al Jolson. I swallowed a button once in my foolhardy attempt to achieve his vocal effect of sound tumbling over river stones. Then along came ee cummings who brought April up a lot. She seemed to be a girl about my age who brought springtime "into the ragged meadows of (his) soul." A few years later T.S. Eliot informed me that April is cruel. There I sat, caught in paradox. But Pat Kelly came along and quoted a few lines from Rawlings: "All my life, when April is a thin green, and the flavor of rain is on my tongue, a wound will throb, and nostalgia will fill me for something I cannot quite remember." (The Yearling) He and I married in April, on a rainy day in Minnesota. Ten years later, in April, he was dying and told me I should marry again. When I protested that I didn't know anyone to marry, Pat said, "Someone will come." And John came.

Today, on this April afternoon, it will have been two years since John died. It snowed that afternoon just after he breathed his last breath, just to show how intense a paradox can get. Thin green grasses poked their spears above the freezing white. The cruelist month? Ah, Yes. Nostalgia? Yes, to that as well. Of Grace, John was the most complete manifestation I've been given. The wound throbs, the rains fall, but something truly rising is planted in the ragged meadows of my soul.

Now I intend to quote a whole poem from cummings. You may stop reading here if cummings has a tendency to set your mind spinning with his strange punctuation, his lower case, his unfinished and circular syntax. But I'd never read this one before today, and what a surprise to find that it includes the whole story:

Now i lay (with everywhere around
me(the great dim deep sound
of rain ;and of always and of nowhere)and

what a gently welcoming darkestness--

now i lay me down(in a most steep
more than music)feeling that sunlight is
(life and day are)only loaned:whereas
night is given(night and death and the rain

are given;and given is how beautifully snow)

something which nobody may keep.
now i lay me down to dream of Spring
(Thanks to Krista Karels for the thin green photo)
Email Post

I love the new look of the blog, and the wonderful music selection.

I miss you much, and wish I could hug you today. Blow a kiss to Uncle John's tree for me and whisper my love to him.

So much in this entry to feed me. Thin green. the great dim deep sound of rain. . . .a gently welcoming darkestness. . . . (the spellcheck does not like that last word, but I do!)

I miss John (and Dale) so much! Knowing they were there at the end of the telephone or email was one of the things that grounded me. They were such good men.

I miss you, too! Watch out for the lions and tigers and bears - oh, my!

Beryl Singleton Bissell said…
I must have missed the music selection but I was moved to think of you and John and of Pat as well. April joinings and leavings. I hold you in my thoughts dear friend.

I'm reading Mary Oliver's Thirst and memorizing poems. Messengers ("my work is loving the world") and When I am Among Trees ("walk slowly and bow often")and falling into prayer.
April 20, 2010 at 10:38 AM

Christin Lore Weber said…
Thank you dear friends and niece/friends -- your words hold me up, give me the gold buds of hope and the limbs of courage.

Suzanne, what would have become of his poetry had cummings had a spellcheck??? or even worse, a grammar check ;)

And Beryl, thanks for the Mary Oliver tip. I have a large book of her selected poems, and a few individual books, but not the one you mentioned.
April 20, 2010 at 12:10 PM

walk2write said…
If you've lived truly and loved well, then your sense of humor won't leave you, no matter what trials confront you. Beginning your story with the memory of the "lost" button adds credence to that theory. April does inspire one with dreams, strange ones at times.
April 20, 2010 at 2:27 PM