SHADOWS ON THE EARTH 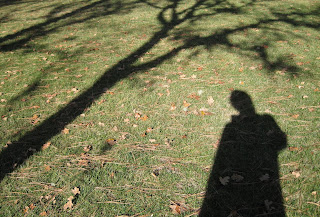 Dawn came today with mist, a white veil across the mountains. Nothing is clear. Colors dissolve into each other and perspective seems lost. The leaves lie wet and sodden on the grass. I've lit the candles for my prayer: one beneath the icon of Christ Pantocrator, a reproduction of the one at the monastery of St. Catherine in Sinai; and the other beneath the icon of Mary of Sitka that John and I purchased at the little store across from the cathedral in Alaska. My morning songs have been sung and I've offered my voice to join the millions around the world in the praying of psalms and invocations that comprise the "Prayer of the Church." In "Lauds," the prayer at dawn, I found myself chanting the words from Psalm 144.

3Why do we humans mean anything

to you, our LORD?

Why do you care about us?

we last no longer

than a faint shadow.

"Another November thought," I muse. And then the words of an email I received the other day come to mind. Dick, the man who sent the email, is engaged in that intense and profound spiritual task of those of us in our final years—integration. It's something more than just fitting the fragments of a life together. It has to do with integrity, with telling the truth about who we really are, and because that truth spills over into something far larger, it includes telling the truth about whatever God might be. He's almost got it, he tells me. A few more explorations and science and spirituality/religion will fit together. It's the task of a lifetime. The question, though, that is perennial—asked in the scriptures, asked by the mystics and theologians, asked by Camus and by MacLeish, continues to elude him.

He writes: "DO KEEP ME INFORMED about your works and current speculations about the future of our disturbed world. Perhaps -- when you have the time -- you could jot down some thoughts about YOUR VIEW of the JUSTICE OF GOD(HEAD?). I've had a real struggle as I decide how to think about this, the deepest of (theoretical and pragmatic) issues (as I see the state of our EARTH)…"

He's asking me to engage with him in "Theodicy"—Justifying the ways of God to human beings. It's the question of Job: "Why do the innocent suffer?" The key here is "innocent," because there's a certain logic to the suffering of those who can make choices, who bring suffering upon themselves as a consequence of their actions. The sin of Adam often is invoked (the "sin of the world" as Jesus called it) but what exactly is that? "The fruit of the knowledge of good and evil," says Genesis. Does it mean that once I've internalized (eaten) the knowledge of both good and evil, I will suffer? It could mean that. I will see it then. Then it will weigh me down. I will shed tears over it. My heart will burn with it or will turn cold. The heart can turn to ice with it, can close off to the world where the knowledge of evil takes place. To "know" is to participate in, to hold a thing inside me. I eat it; it eats me. I am no longer innocent.

God answers Job by asking, "Where were you when the earth was formed?" Meaning, I think, that when Job can create a world on a par with God's creation, then he's on a level to answer the question. In the meantime, he hasn't enough information, enough wisdom, enough power, enough---well, Be-ing. He's a shadow upon the earth that fades. But why?

Here's where MacLeish (The play, JB) paraphrases the problem in the jingle:

If God is good

He is not God;

If God is God

He is not good.

I would not stay here if I could,

Except for the little green leaves in the wood,

And the wind on the water.

If God had chosen to create the world differently, we would not only not be free (the usual answer), we would not even BE. This is the juncture at which I always wish I were a scientist. But all I have is intuition. So to me Theodicy looks like this: In order for human beings to exist there had to be matter—the material creation—the big bang—whatever you want to call it. There had to be interaction. There had to be verbs. There had to be coming in and out (movement or evolving or change). Matter becomes energy, energy becomes matter—isn't that right? Spiritual vision has spirit becoming body/ body dissolving into spirit. It's the dissolving we find objectionable. It hurts. As individuals we seem to disappear. Where are mom and dad? Where's my husband? Where is the green of last year's leaves? It sometimes feels evil—sometimes it actually IS evil: usually when we thwart the process, set ourselves up as the powerful ones, pretend to be God, cry out the words of Lucifer, "I will not serve." A current is set in motion, then, that seeks to wipe out being itself. Our relationships begin to collapse, our societies, we cease to care about creation itself, our world, our universe, we become angry and intent upon destruction. We become part of the "sin of the world," which essentially is the declaration: "I no longer want to be human, I want to be God."

This creation of which we are a part is both beautiful and terrifying. It is a gift that "reaches from end to end, mightily and sweetly." God, I believe, is in every molecule, every atom, every string, holding together the paradox of spirit/matter being. If we live it fully, we fall in love with all of it—gift and loss, life and death—not just in our individual lives, but in the life of societies and of the whole world; in the gathering of galaxies as well as their disappearance into black holes so dense that nothing can escape; in the attraction of the stars, and the hunger of being for itself.

In all of this may God be praised. This is all I know, and I barely know it at all. I am a shadow, my bodily aspect is made mostly of water distributed throughout a handful of dust, infused with the breath of the Holy Being. I like it here.

Anonymous said…
Christin, it is so good to "hear" your written voice again on your blog. I've missed it! Such meaty thoughts to ponder!